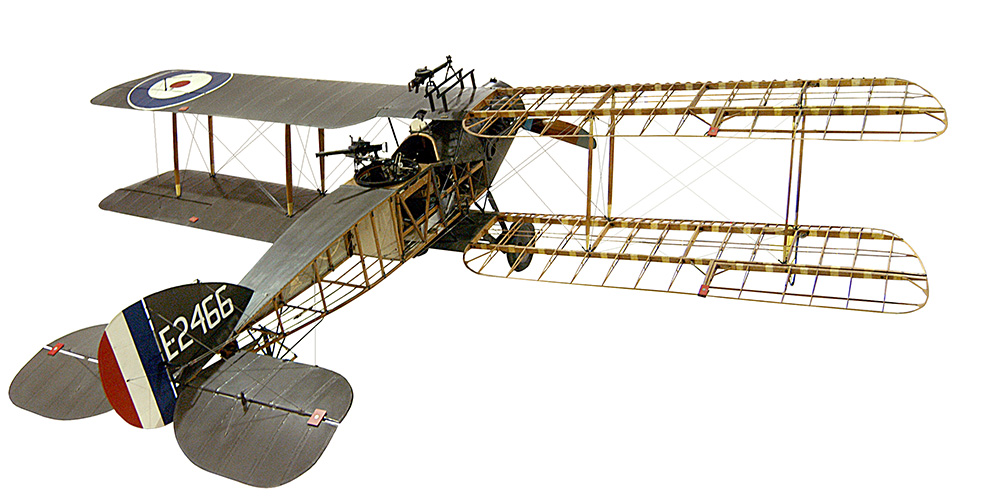 The Bristol Fighter was designed in 1916 as a replacement for the B.E. two-seaters. No.48 Squadron received the first production aircraft and introduced them into service during the Battle of Arras in April 1917. Flown in the tight defensive formations normal to two-seaters at the time, this baptism of fire was unsuccessful but it became an excellent fighting machine when the tactics were changed to allow it to be flown in the more aggressive manner of a single-seater. By the end of the war the type had been used for offensive patrols, photographic reconnaissance, escort fighting and ground attacks.

Having shown such versatility during the war it was one of the designs chosen by Hugh Trenchard to equip the peacetime Royal Air Force. Despite increasing age and poor flying conditions in many parts of the Empire, where it helped to establish the Royal Air Force’s role as aerial policeman, the Bristol Fighter soldiered on until 1932.

This particular example has been re-built to represent the aircraft flown by Captain W.F.J. Harvey and Captain D.E. Waight, No.22 Squadron, from Agincourt on 1 July 1918. The aircraft was modified, by the squadron, to take an extra Lewis machine gun on the centre section of the top mainplane.