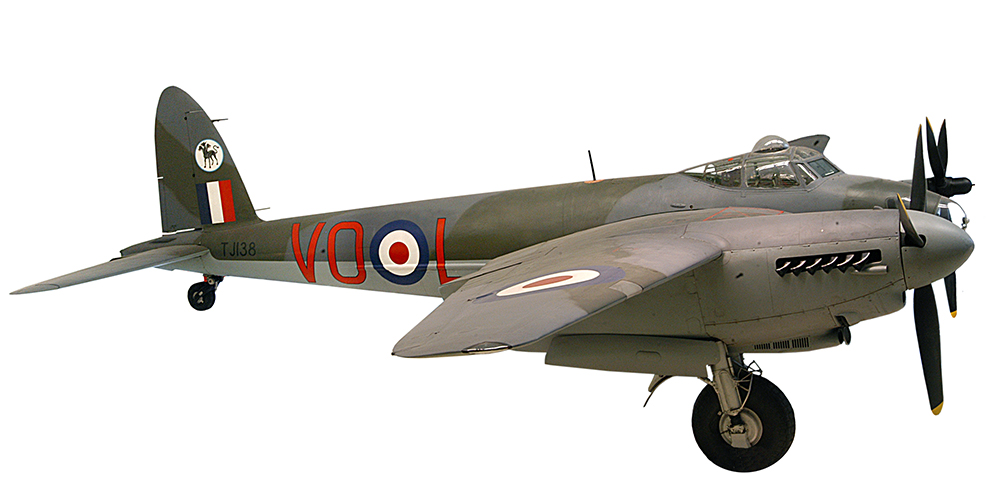 The Mosquito was a remarkable aircraft for its time; not only was it made largely of wood but it was designed as an unarmed bomber, depending on its superior speed to escape enemy fighters. It was nicknamed ‘The Wooden Wonder’.

On 12 March 1945 the last bomber variant of the Mosquito, the B35, made its first test flight. The war had ended before it could be used operationally, but it entered service with the post-war Royal Air Force and served as a bomber until the beginning of 1954.

Some Mosquito B35s were converted for other duties including target-towing and in this role they continued in service until 1963. No.105 Squadron introduced Mosquitos into service in May 1942 as daylight bombers.

However, as the RAF’s night bomber offensive grew, they were used with the Pathfinder Force and in other roles within Bomber Command.

The Mosquito also proved a remarkably versatile aircraft in other roles. It was a great success as a night fighter and intruder, as well as an anti-shipping strike aircraft. Both the Royal Air Force and the United States Army Air Force used Mosquitos for photographic reconnaissance duties.
What makes this a milestone aircraft?

Apart from its tremendous versatility, this aircraft demonstrated, perhaps more than any other at the time, how innovative production methods and the use of different materials can produce a high-performance world beater.