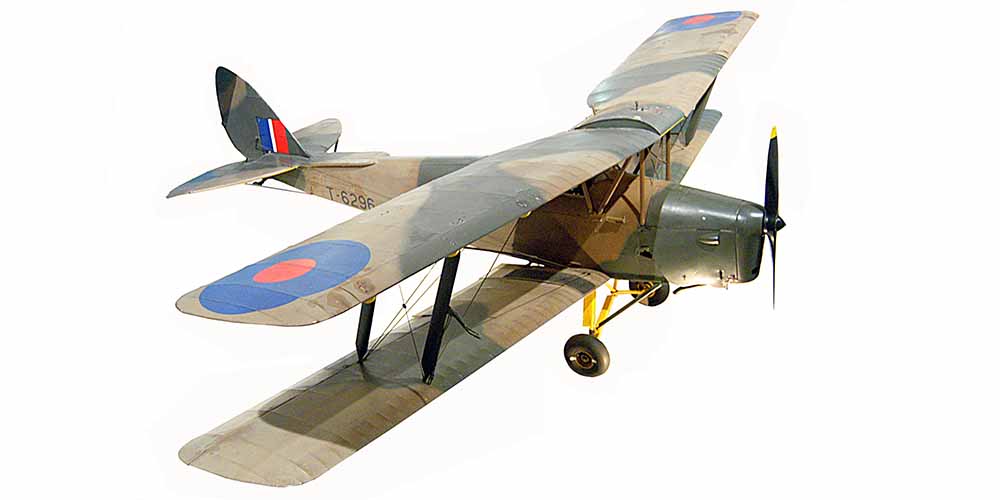 Originally produced as a development of the well-known Gipsy Moth the Tiger Moth went on to become one of the world’s most famous training aircraft. During World War Two it provided the majority of RAF pilots with their elementary flying training.

After the Dunkirk evacuation, in 1940, almost any anti-invasion idea was considered; just three of the more extraordinary Tiger Moth conversions are given below:

In August 1940, 350 Tiger Moths were fitted with light bomb racks. These aircraft were to undertake the bombing of enemy troops attempting a landing.

The ‘paraslasher’; a scythe-like blade fitted to a Tiger Moth and intended to cut parachutist’s canopies as they descended to earth. Flight tests proved the idea, but it was not officially adopted.

The Tiger Moth ‘human crop sprayer’ used a tank fitted in the front cockpit with powder dispensers located under the wings. The tank would be filled with ‘Paris Green’, an extremely poisonous insecticide. It was intended that low flying aircraft would dust the German troops as they waded ashore.

Fortunately none of these ideas had to be used, leaving Elementary Flying Training Schools to their vital role of pilot training.