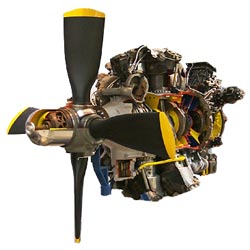 The Wright Cyclone series of aviation engines began life in 1924 as a 435hp single-row radial. By 1936 the series had progressed to development of the giant R3350, an eighteen-cylinder two-row air-cooled radial of 57 litre capacity producing 2000hp. By the time it was fitted as standard to the Boeing B29 Super Fortress bomber, output had increased to 2200hp. Other aircraft to use the engine included the Lockheed Constellation and P2 Neptune.