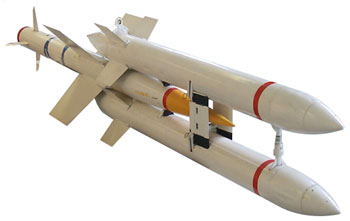 The Fireflash Air-to-Air Missile project started in 1949 as the ‘Blue Sky’ project. The missile had a strikingly unusual configuration that has yet to be repeated. The missile was itself unpowered, being accelerated to Mach 2 by a pair of solid rocket boost motors arranged above and below the front section of the weapon.

The boost motors expired after 1.5 secs, which caused the missile’s velocity to rapidly decrease as it coasted towards the target.

This project produced 300 missiles, before the decision was made to exclude it from the RAF’s inventory. The 300 missiles were used by No 1 Guided Weapons Development Squadron at RAF Valley, the missiles being fired from a Swift F7.