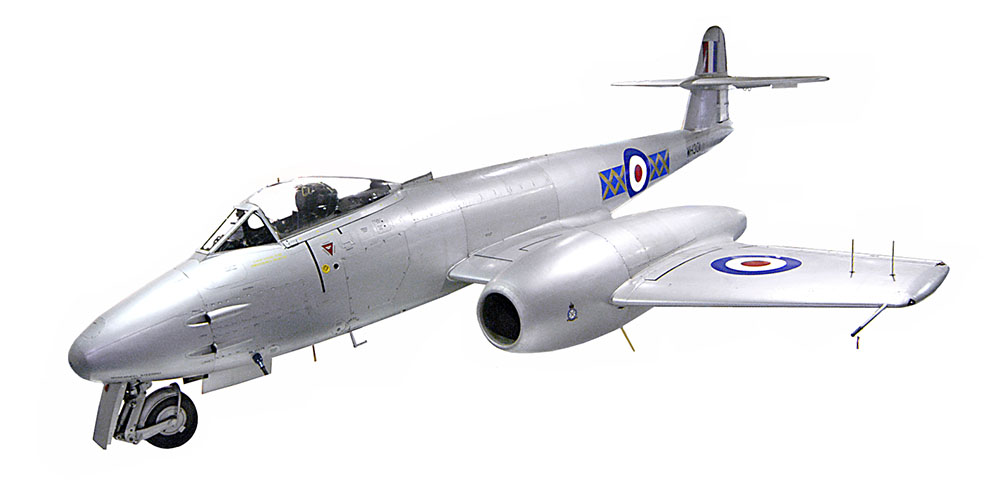 The Gloster Meteor was the only allied jet to see combat in World War Two and in its various marks served in day, night and training operations. Its sturdy construction also made it an ideal test bed for a variety of products which followed it. Between 1950 and 1955 the Meteor F8 provided the backbone of Britain’s air defence capability.

By the end of the 1947 the British Meteor fighter had fallen behind its contemporaries in efficiency and performance. In an effort to redress the balance the Gloster design office produced a re-design which was a marked improvement while retaining as much of the structure of the earlier aircraft as possible for production purposes.

The new Meteor proved a success and over a thousand of the new fighters were built to re-equip twenty Fighter Command squadrons and ten squadrons of the Royal Auxiliary Air Force.

The Royal Air Force never used the Meteor F8 in anger but it did see combat with the Royal Australian Air Force during the Korean War (1950 to 1953). Outclassed by the MiG-15 in the fighter role, the Meteor was switched to ground attack where it notched up an impressive record.

After withdrawal from front line service a number of Meteor F8s were converted for target towing duties.