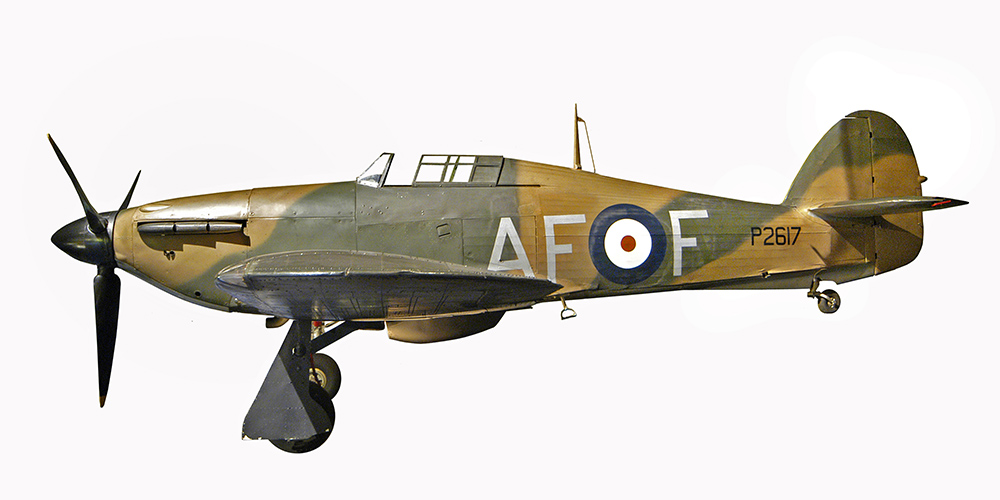 The Hurricane will always be remembered for the vital role it played, with its partner the Spitfire, in hectic battles during the summer of 1940. Hurricanes destroyed more enemy aircraft during the Battle of Britain than did all the other air and ground defences combined.

Designed by the Hawker Aircraft Company in 1934 it first entered service in 1937. It provided the RAF with a fighter 160kph (100mph) faster than aircraft then in service; with an increased fire power of eight machine guns.

When war was declared, on the 3 September 1939, about five-hundred Hurricanes were in service and several squadrons were sent to France. During the 1940 German Blitzkrieg through the Low Countries and France they fought a punishing rearguard action in which over 25% of all Fighter Command’s aircraft were destroyed.

As the Battle of Britain raged in the skies overhead aircraft production increased so that by September 1940 the number of Hurricane squadrons had risen from eighteen, a year earlier, to thirty-two.

It was in a Hurricane of No.249 Squadron that Flt Lt J.B. Nicholson was awarded Fighter Command’s only Victoria Cross.

Later in the War Hurricanes made a significant contribution to the defence of Malta, the desert war in North Africa and war against the Japanese in the Far East.