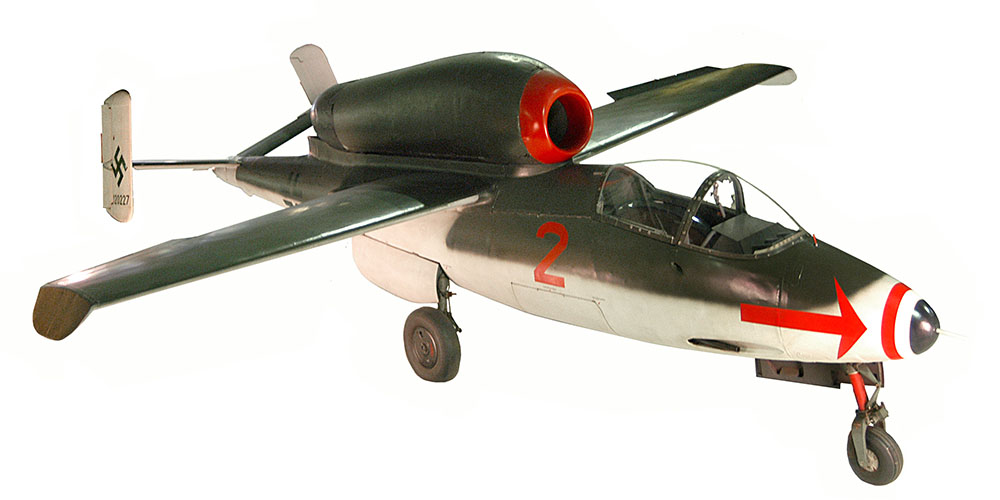 The Heinkel He162 was one of Nazi Germany’s last ditch attempts to win back the control of the skies with a cheap jet fighter capable of being flown by almost anyone. Like all the other weapons it came too late to have any effect on the outcome of the war.

By September 1944 the Western Allies and the Russians were closing in on the borders of German homeland and in a desperate attempt to reverse their defeats the Germans began a frantic search for a war-winning ‘wonder weapon’.

The German aircraft industry produced a number of designs including the popularly known ‘Volksjager’ (People’s Fighter), the He162 jet fighter. Using a high proportion of wood in its construction due to shortages of light alloys, it was designed for mass production by semi-skilled labour at a number of dispersed sites.

In such a desperate period it took just sixty nine days from the start of design work to its first flight. As might be expected from such a hurried design the aircraft had unpleasant flying characteristics. Very few He162s were ever encountered in combat. Deliveries began to Luftwaffe units in February 1945 but only two victories were claimed for the type during its short service life and both were unconfirmed.

Although plans existed for a monthly production of 4,000, less than 200 were actually delivered to the German Air Force by the end of the war.