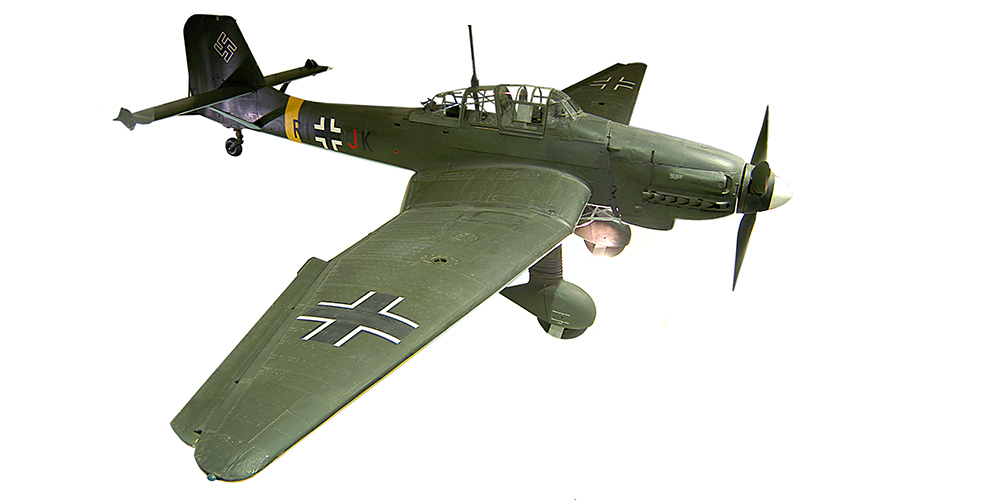 The Ju87 was one of the most feared aircraft during World War Two. Its fixed undercarriage and cranked wing gave the Ju87 an evil appearance and the scream of its ‘Trumpets of Jericho’ sirens as it dived helped to spread terror amongst both soldiers and civilians.

Widely known as the ‘Stuka,’ from the German word for dive-bomber (Sturzkampfflugzueg), the Ju87 first saw action in the Spanish Civil War (1936 to 1939). The campaigns in Poland and France added to its legendary reputation. With little aerial opposition it was able to attack targets with great accuracy.

After the fall of France it was used to attack shipping in the Channel. The Ju87 went on to sink more ships than any other aircraft in history. ‘Stuka’ units then turned their attention to coastal airfields and radar stations, but by August 1940 heavy losses from defending fighters resulted in their withdrawal from operations. This poorly armed, slow and highly vulnerable aircraft found it impossible to operate without air superiority over the battlefield.

Later in the war a specialist anti-armour version was produced which brought havoc to the tank armies on the Russian Front.