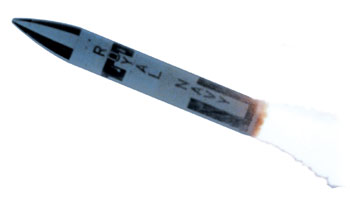 Perfection of this missile represents one of the greatest achievements in missile engineering. The problem presented to Lockheed and its subcontractors in 1956 was to produce an H-bomb missile small enough to be carried in quantity by a submarine and able to be launched underwater. The first successful launch from a US Navy submarine, the USS George Washington, was in July 1960. The upgraded A3 version was later obtained for the Royal Navy. Between June 1968 and September 1970 the Royal Navy commissioned the Submarines Resolution, Repulse, Renown and Revenge. Each submarine carried 16 Polaris missiles and on commissioning of the 3rd Polaris submarine, HMS Renown, the RAF handed its strategic nuclear deterrent role to the Royal Navy.

Each Polaris was housed in its own launch tube within the submarine. To launch the missile gas/steam blew the missile like a cork out of a popgun. Once clear of the water the first stage motor ignited pushing the missile into the outer atmosphere.

On reaching the optimum distance from the target the warheads, decoys and penetration aids were deployed ballistically.