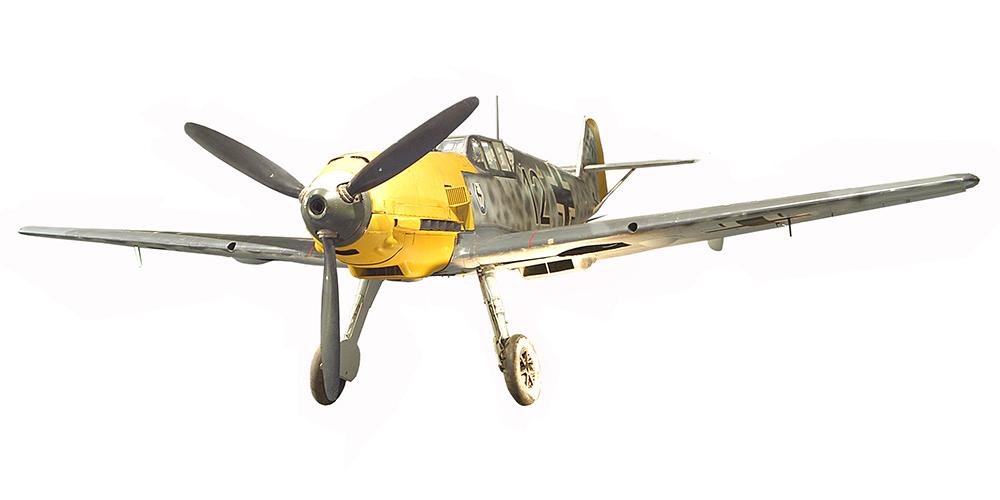 During the early war years the Bf109 was one of the world’s finest single seat fighters. Its basic design provided the potential for it to take new engines and armament so that it remained the backbone of the Luftwaffe fighter forces throughout World War Two.

The Bf109E was an improved version of an aircraft designed by Willi Messerschmitt in 1935. It had proved to be a superb fighter during early combat trials in the Spanish Civil War. Only when German fighter pilots met the Spitfire in combat did they find an aircraft in some ways equal to their own. The Bf109E was as fast as the Spitfire, faster than the Hurricane but could out-climb both.

Although a superb fighter it, like most of its contemporaries, was under-gunned (a deficiency which was not remedied until the introduction of the Bf109G) and had poor ground handling characteristics. Perhaps its worst handicap, during the Battle of Britain, was its limited fuel capacity. This meant limited range and endurance so, they could only remain over the United Kingdom for a few minutes of combat before having to break off the engagement and return to base.

With mounting medium bomber losses the Luftwaffe introduced a fighter-bomber version in October 1940.