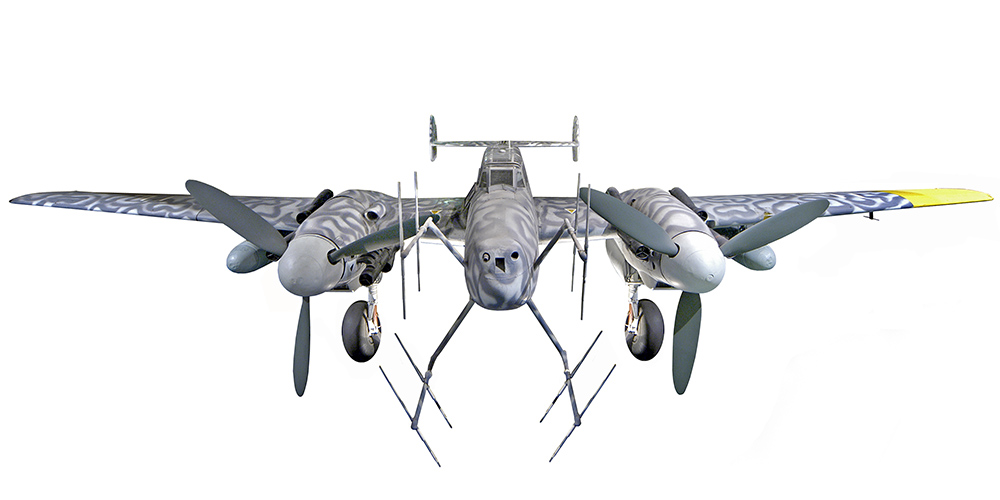 The Bf 110 was an effective, highly versatile twin-engined aircraft. Outmanoeuvred by the British fighters during the Battle of Britain it was converted into a night fighter and proved to be one of the most successful put into service during World War Two.

The Bf 110 was conceived as a Zerstörer, a long range escort fighter equally able to undertake defensive or offensive tasks. This high-performance, heavily-armed fighter first entered service in 1939 and was able to take part in the Polish campaign where it performed well.

The Zerstörer concept was not really put to the test during the opening months of the war but events in the Battle of Britain proved it to be a mistake. Although a highly effective fighter the Messerschmitt Bf 110 was misused as an escort fighter on daylight bomber missions which resulted in huge losses. Operating well below its top speed it proved unable to fight on equal terms with the more agile British single seat Hurricane and Spitfire fighters.

Although mounting losses should have resulted in its withdrawal because of the limited range and endurance of the single engined Messerschmitt Bf 109Es the Germans were forced to continue using the type as a fighter escort on its daylight raids.

After the Battle of Britain it was used in the Mediterranean and the Soviet Union. Once Bomber Command increased its nocturnal raids over Germany, most Bf 110s were sent to new night fighter units. Equipped with radar it proved to be an effective interceptor but it was limited by its speed, caused by draggy radar antennas, and short range. The Bf 110 G-4 was the last operational variant. Over six thousand Bf 110s were produced until the end of the war.