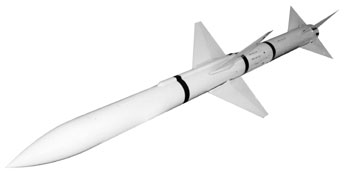 The Sparrow Air-to-Air Missile (AAM) began as Project Hot-Shot in 1946 under contract from the US Navy. However, full engineering development of Sparrow I did not start until 1951. The Sparrow I was a ‘beam-riding’ missile, with aerials mounted around the missile body which received the fighter’s radar beam. In addition to the moving cruciform delta wings, four fixed fins were fitted to the tail.

Sparrow II was funded in 1955, in an attempt to overcome the draw backs of the ‘beam-riding’ guidance of Sparrow I. The new version of Sparrow was fitted with a fully active radar and was larger than Sparrow I. However, in 1956 the US Navy cancelled the project in favour of Sparrow III. The Royal Canadian Air Force took over the funding of Sparrow II with the aim of arming the new Arrow supersonic interceptor. However, both Sparrow II and Arrow were eventually cancelled. Sparrow III was fitted with semi-active guidance, homing in on the reflected radar signals from the target aircraft, which is held in ‘radar-lock’ by the launch aircraft. Sparrow III reached IOC in 1958 as the AIM-7C, entering service with the Atlantic and Pacific fleets. The USAF also introduced Sparrow III in 1960 as the AIM-101, to arm the Phantom.