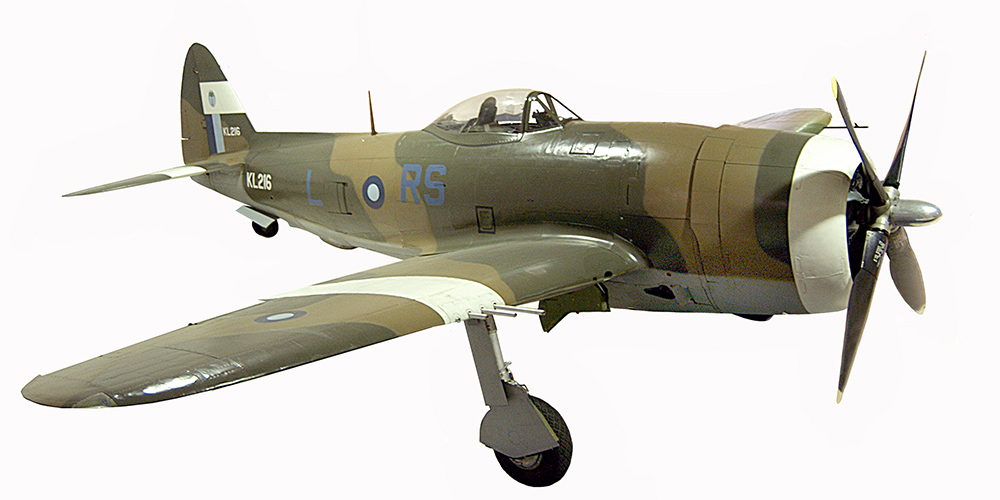 The Thunderbolt was one of the three most important American fighters produced during the war and saw extensive service with the United States Army Air Force before its comparatively late introduction into RAF operational service in 1944.

This big and strongly built fighter bomber, with its good low level performance and long range made an ideal replacement for the RAF’s Hurricane fighter bombers operating over Burma. The RAF only used the Thunderbolt against the Japanese in South East Asia Command.

By 1944 air/ground co-operation had been successfully developed into a powerful tactical tool and RAF Thunderbolts in Burma quickly adopted ‘cab rank’ patrols available to attack any enemy ground target holding up the Allied advance. Directed by ground visual control posts, the Thunderbolts, with their heavy gun armament and 500lb bombs, created havoc amongst Japanese troop concentrations and their supply lines.

During the air battles leading to the re-capture of Rangoon, RAF Thunderbolts flew fighter escort missions with RAF Liberator bombers.

By the end of 1945 RAF Thunderbolt squadrons were re equipping with Hawker Tempest Iis but some units were sent to Batavia in an attempt to re-introduce Dutch colonial rule. Whilst there they undertook a number of bombing missions against Indonesian guerrillas and rebel airfields.