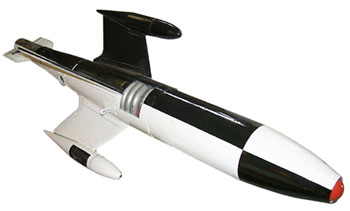 The X4, was developed as an Air-to-Air Missile (AAM), although its use of wire guidance paved the way for modern anti-tank missiles, which often used wire guidance for reliability and immunity to countermeasures.

The X4 project started under Dr Max Krammer at Ruhrstahl in 1943. The smooth cruciform of wings were swept back to reduce drag when mounted under a jet fighter. Control was achieved by combined use of tabs on the wings and additional control surfaces on the tail fins. The X4 was powered by a BMW 548 motor which was fed with hypergolic propellants by a complex fuel delivery system, which was designed to prevent fuel starvation during violent manoeuvres.

X4 was launched from the same altitude as the target (from the rear) at more than 1.5km (0.93 miles). The pilot maintained the target and missile alignment after firing, using a small joystick as part of the command link control system. The two control lines were dispersed from bobbins on two of the four wings. It was intended to add acoustic homing and fusing to the 20kg (40lb) of explosive, although most of the missiles used a proximity fuse.

By late 1944, 1,300 missiles had been produced and many hundreds test fired. Successful allied bombing of BMW’s Stargard plant destroyed over 1,000 motors intended for the X4, which left 1,000 X4 missiles waiting for motors. This delay was long enough to prevent most of them reaching combat units, as a result only a few were fired in anger.