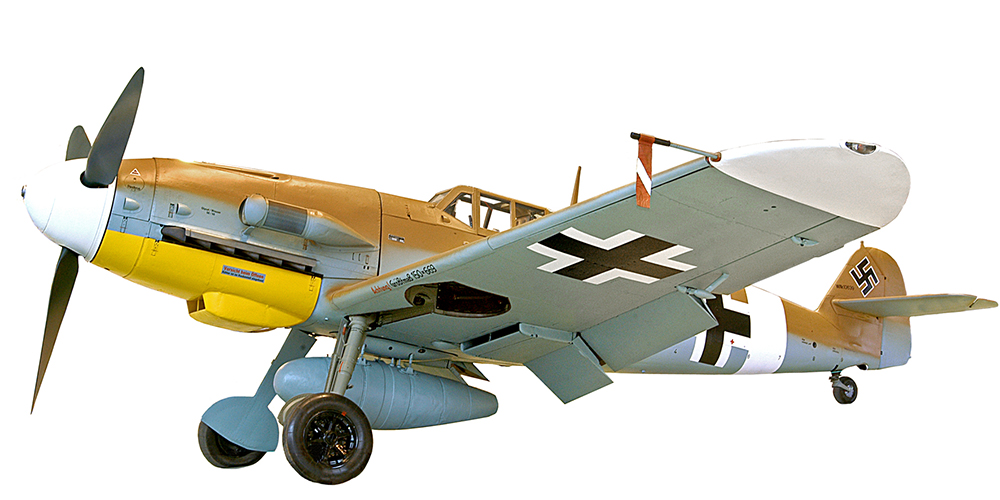 The Bf 109, designed by Willi Messerschmitt, is a legend alongside the British Spitfire, American P51 Mustang and the Japanese Zero.

First flown in 1935, the Bf109 was obsolescent by the second half of World War Two yet it remained the backbone of the German Air Force’s day fighter force and was flown by many of her allies. In production right up to the end of hostilities, more than 33000 were built second only to the Russian ‘Sturmovik’ as the most prolific military design, and post-war versions served with the Czech, Israeli and Spanish Air Forces, the latter until the mid-1960s – with Rolls Royce Merlin engines! – surviving long enough to be used in the classic ‘Battle of Britain’ film in 1968.

Compact, rugged, fast and heavily armed the Bf109 has the distinction of being flown by the highest-scoring fighter aces in history. The promised availability of the new Daimler-Benz engine, the DB 605A prompted design work to begin on the Bf109G series. Higher speeds were obtained but manoeuvrability and handling were adversely affected. The Bf109G series will be forever linked with the daylight bomber-killing missions in defence of the Reich. German fighter pilots found themselves facing heavily armed American B17 Fortress and B24 Liberator bombers and later long range P38 Lightning, P47 Thunderbolt and P51 Mustang fighters. Ground down by the overwhelming odds few survived the war.