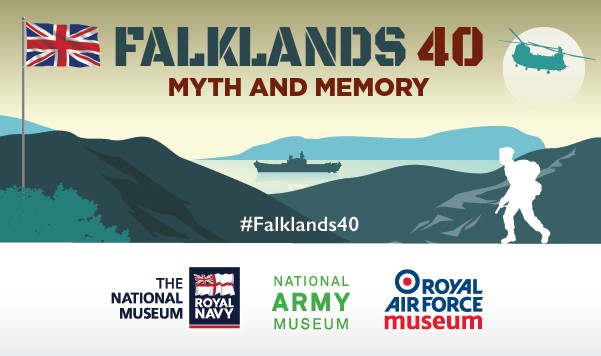 The National Museum of the Royal Navy , National Army Museum, and the Royal Air Force Museum are pleased to announce a joint event to mark 40 years since the Falklands Conflict.

The conflict lasted 74 days after Argentine Forces invaded the Falklands on 2 April 1982. On the 5 April, a task force set sail from the UK which eventually involved almost 26,000 Armed Forces Personnel and 3000 civilian crew. Following weeks of intense fighting the conflict ended with the Argentine surrender on 14 June 1982. A date now known as Liberation day in the Falkland Islands. 255 British personnel and 649 Argentines lost their lives in this 74 day conflict.

The three Services Museums will be joining forces to bring you a programme of events from Thursday 19 to Sunday 22 May. The headline event will be a debate chaired by Caroline Wyatt live streamed from the National Army Museum in London, featuring a curator from each Museum.