A Cuckoo in the Nest

Our previous blogs have examined the evolution of Sopwith aircraft, from the 1½ Strutter to the Dragon. This will consider the Sopwith Cuckoo, the first purpose-designed carrier-borne torpedo bomber and its role in a still-born attack upon the German High Seas Fleet.

Between the early years of the Twentieth century and the First World War, Germany sought to challenge Britain’s naval supremacy. An ambitious warship-building plan was begun in Germany and Britain replied with its own programme.

In a bold step, Britain launched HMS Dreadnought in 1906, a battleship which rendered its predecessors obsolete. A new race to build ‘dreadnoughts’ then began in earnest, in which Britain would continue to hold an advantage though a small head-start, a policy of maintaining naval superiority and a large number of shipyards.

Germany, by contrast, was a military, land-oriented state and the shift to challenging Britain’s maritime dominance took time. Although Britain held a numerical advantage to the end of the First World War, the Royal Navy was unable to achieve a result in its small-scale and infrequent encounters with the High Seas Fleet which matched the expectations of the British press and public.

This again proved to be the case in the great ‘clash of the dreadnoughts’ off Jutland in May 1916, when neither side secured a decisive victory.
An unsatisfactory stalemate thus prevailed and with the German fleet unwilling to venture from its bases, the Admiralty turned its mind to possible solutions.

One of the more promising was a proposal made in late 1916 by Murray Sueter (heading the Admiralty’s Air Department) to attack the German High Seas Fleet at anchor with torpedo-carrying aircraft launched from a small fleet of seaplane tenders. Such aeroplanes already existed in the Royal Naval Air Service (RNAS) armoury, notably the Short Admiralty Type 184, a floatplane which had achieved a measure of success as a torpedo-bomber during the Dardanelles campaign. 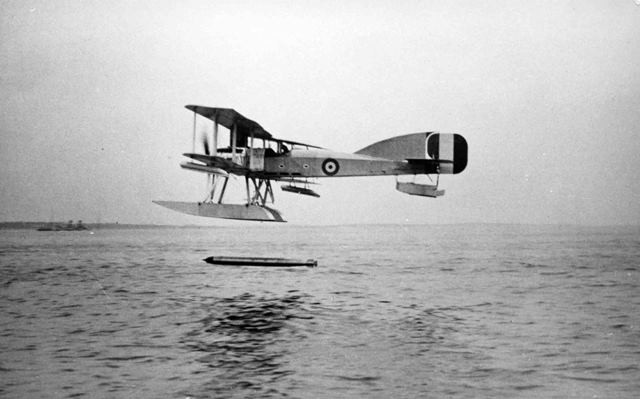 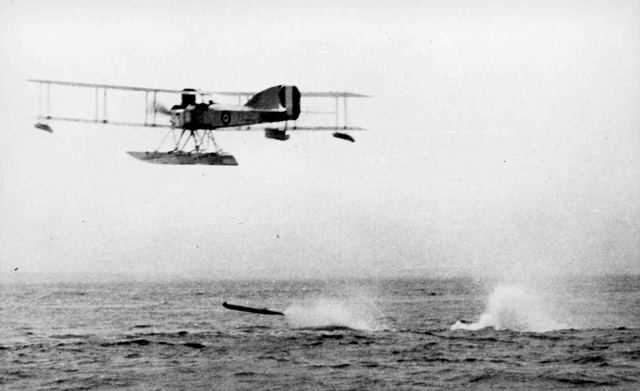 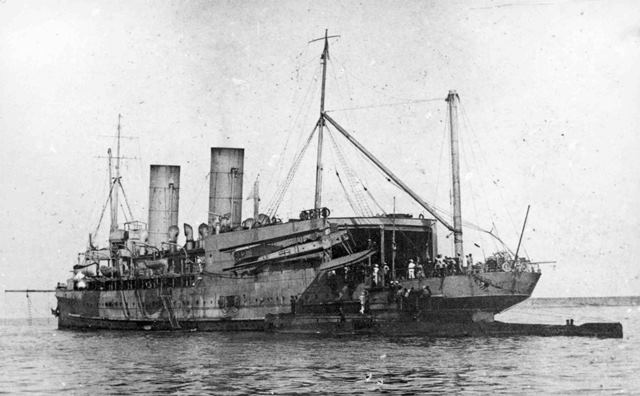 However, the utility of a torpedo-carrying floatplane was beset with limitations. The aircraft was hampered by the weight and drag of its floats and when loaded with a weapon of any size, needed all the power available from its engine to stagger clear of the water.

A large torpedo, of considerable explosive power, was needed to seriously damage a German dreadnought, yet it was clear that there was no floatplane in 1916 capable of successfully taking-off from the North Sea and flying to Wilhelmshaven while carrying such a weapon. 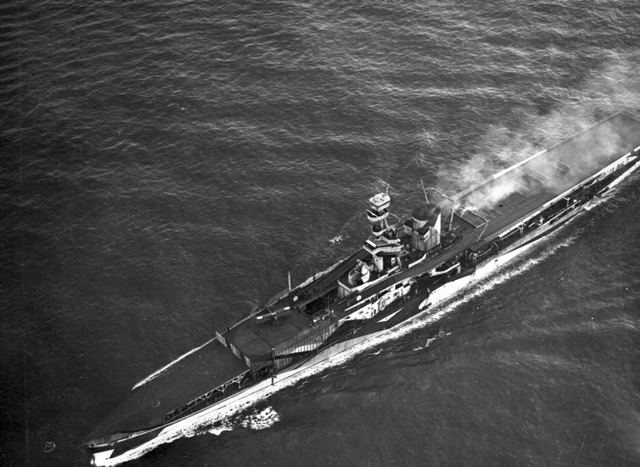 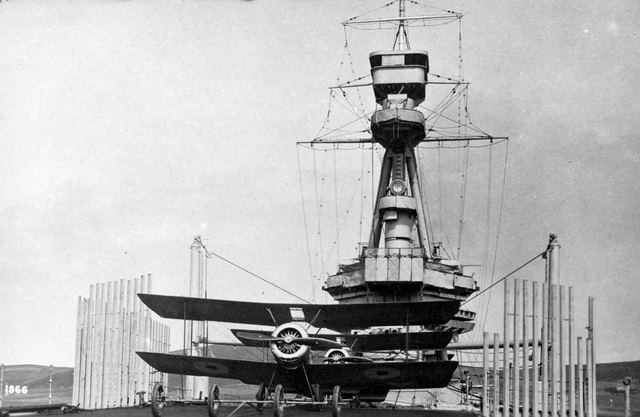 The obvious answer was to use landplanes to launch the torpedoes. However, the problem of distance came into play, with no British airfields being near enough to the German bases.

A possible solution to this came with the evolution of the aircraft carrier, about which the Admiralty was enthusiastic, and much experimentation was being done in taking off and landing small aircraft aboard the converted battlecruiser HMS Furious. In its early form, Furious featured a small ‘flying-off’ deck at the bow. Somewhat fraught landings could also be made on this postage stamp-sized deck and later a small ‘landing-on’ deck was added at the stern.

Practical use of both confirmed their unsuitability for even small aircraft such as the Sopwith Pup and thinking turned towards the removal of the central superstructure altogether (turbulence alone from the superstructure was a major problem), allowing a long single flying deck to be built. This layout was clearly the future and although the conversion or building of such vessels would take time, the Admiralty envisaged that a small fleet of aircraft carriers would be available to launch a surprise air strike against Wilhelmshaven, possibly as early as 1918.

A similar but more modest alternative to the Wilhelmshaven idea, again sponsored by Sueter, was to attack the Austrian fleet at Cattaro (present-day Kotor) with half a dozen Short Admiralty Type 320 floatplanes, where the generally calmer conditions of the Mediterranean offered a greater scope for torpedo-carrying floatplanes.

In 1917, Sueter departed to the Mediterranean to co-ordinate the strike, which duly went ahead on 2 September, only for a gale to make it impossible to launch any of the aircraft. The raid was cancelled and never rescheduled. 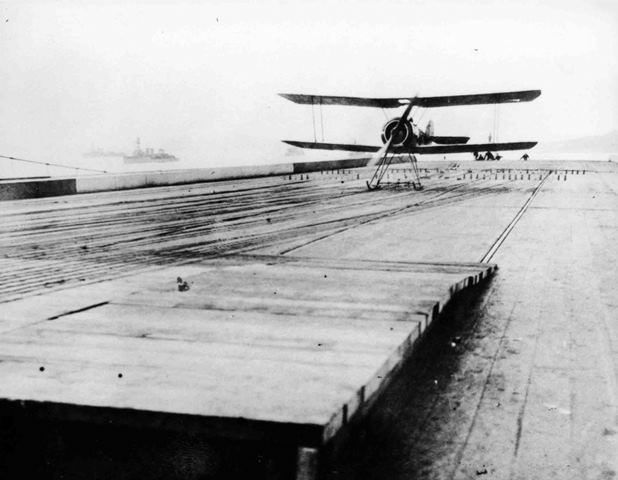 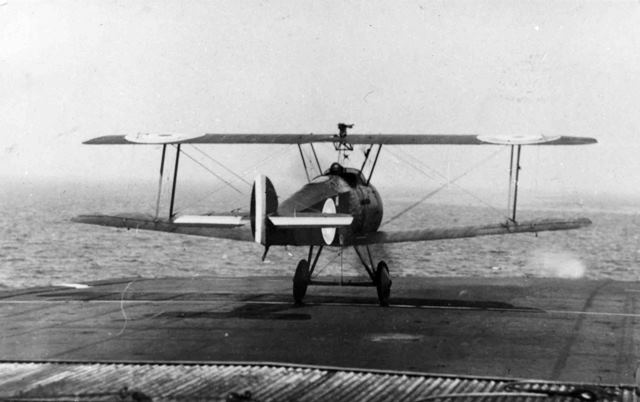 During this time, to replace the 1½ Strutter, the Sopwith Aviation Company had designed and produced the Sopwith B.1, a single-seat bomber which had displayed good performance but awkward handling when sent to France in 1917.

While the B.1 did not succeed in attracting any production orders, Sopwith proceeded to design a similar aircraft which could be launched from an aircraft carrier and carry a heavy torpedo.

In due course, the Sopwith T.1 (the ‘T’ stood for Torpedo) emerged. The aircraft was (somewhat enigmatically) christened the Cuckoo, although this was not until after the Armistice. Plenty of power was required from the single engine and the 200hp Hispano-Suiza V8 was accordingly chosen. Other features included folding wings to minimise storage requirements and a split undercarriage in order to accommodate the intended 18 inch Mark IX torpedo, which weighed 1,000lb.

However, no provision was made for the aircraft to land back aboard its parent carrier and no arrester gear was designed. As a single-seater, the pilot was expected to be responsible for the flying, navigation and dropping of the torpedo himself. If the attack on Wilhelmshaven had occurred, it must be presumed that those aircraft which survived would have been forced to either ditch near their parent vessels or make forced landings elsewhere, possibly in the Netherlands. 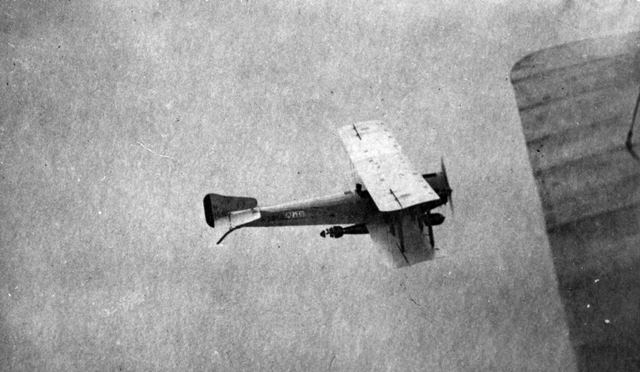 The Cuckoo’s development was apparently hampered by the departure of Sueter to the Mediterranean and it was not until Wing Commander Longmore visited the Sopwith factory that work on the aircraft resumed.

The prototype first flew in June 1917 and official trials were completed the following month. In August, the Admiralty ordered 100 T.1s from Fairfield Shipbuilding and Engineering and another batch from Pegler Brothers in Doncaster. However, these companies had no experience of aircraft manufacturing and lengthy delays ensued.

In February 1918, the Admiralty ordered a further batch of Cuckoos from Blackburn Aircraft. Although the first Blackburn Cuckoos were produced the same year, early examples experienced tailskid breakages and a tendency to swing to the right on take-off, necessitating a redesign of the tail section, which caused further delay. Fairfield and Pegler only began delivery of the Cuckoo very late in the war.

Even more critical was the shortage of Hispano-Suiza engines during late 1917 and 1918, with almost all production being devoted to the Royal Aircraft Factory S.E.5a. Alternatives were sought and the Sunbeam Arab V8 was chosen, presumably because of its similarity to the Hispano, although the Arab was unreliable, heavier and less powerful.

Other engines were proposed, including the 200hp Wolseley Viper, which was installed in a batch of twenty aircraft designated the Sopwith Cuckoo II. These engines were also needed for the S.E.5a and very few were available for other aircraft. Similarly, the 275hp Rolls-Royce Falcon III was considered for the Sopwith Cuckoo III but Falcon manufacture lagged far behind the requirements of even the Bristol Fighter and these engine ramifications, a story familiar to many aircraft of the era, caused further production delays. 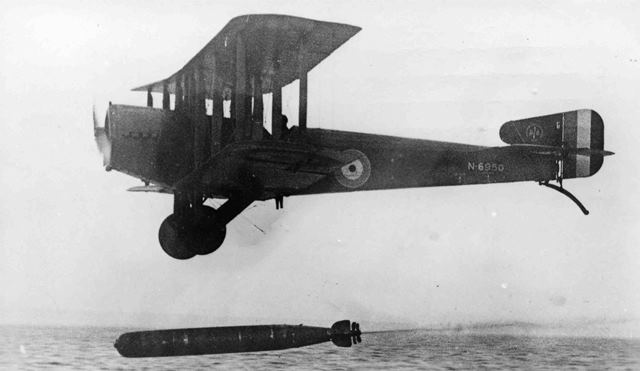 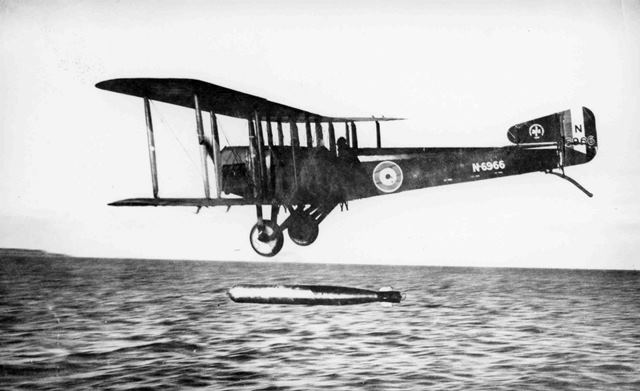 Meanwhile, Admiral Sir David Beatty, commanding the British Grand Fleet, continued to hope that an attack would be made in 1918, writing:

‘As many machines as possible, and not less than 121, to be carried in specially fitted carrier ships to within not more than one hour’s fly from Wilhelmshaven. This rendezvous to be reached at or before daylight. Planes to be flown from the ships in flights of 40, so as to reach their objective in strong forces in close succession.’

These numbers were impractical at the time; it should be borne in mind that Pearl Harbor was attacked by 353 aircraft of which 40 were torpedo bombers.

An attack in 1919 would probably have used three aircraft carriers: Argus (twenty aircraft), Furious (perhaps twelve) and Vindictive (perhaps eight). If Eagle and Hermes had been completed in time, they would have added around another 40 aircraft.

As the attack was planned to take place at dawn, a special paint scheme was formulated for the participating Cuckoos. A matte light sea-grey overall scheme was chosen, with the blue areas of the national markings being painted the same shade of grey, leaving only a thin blue outline on the fuselage roundels. 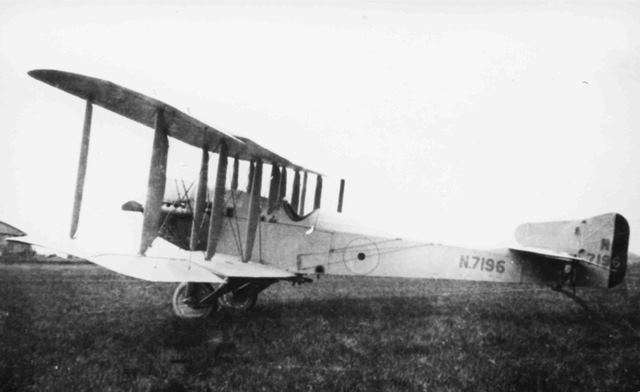 Much to Beatty’s frustration, the proposed attack never materialised. Only a few Cuckoos had entered service by the Armistice and the carriers for them were still under construction.

The nearest operation to the Wilhelmshaven proposal was the launching of seven Sopwith Camels from Furious for the raid on the Zeppelin airship base at Tondern in July 1918. 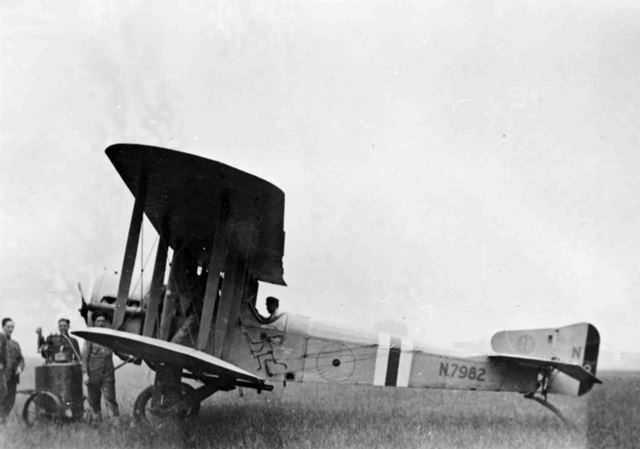 The Cuckoo entered limited post-war RAF service. Two (reportedly successful) mock attacks by small formations of Cuckoos were made on British battleships and others were embarked on HMS Eagle in 1920.

Some pilots were reportedly critical of the Sopwith’s lethargic performance and lack of responsiveness, making it vulnerable to interception, although this was scarcely a primary consideration at the time of its conception. The Cuckoo was declared obsolete in 1923 and was replaced in service by the Blackburn Dart. 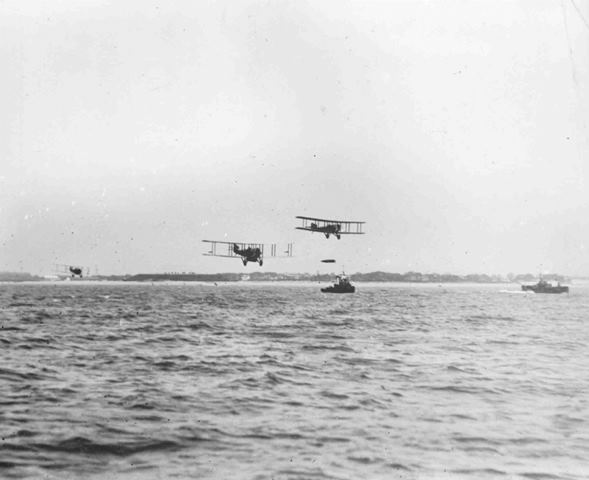 Furious underwent further modification during 1918 and after the First World War was completely rebuilt with a full-length flying deck. She enjoyed a long career, even launching Fairey Barracudas against the Tirpitz in Operations Tungsten, Mascot and Goodwood in 1944. She was finally broken up in 1954.

Campania had a small flying-off deck and space for a limited complement of aircraft. She sank at anchor during a storm in November 1918. 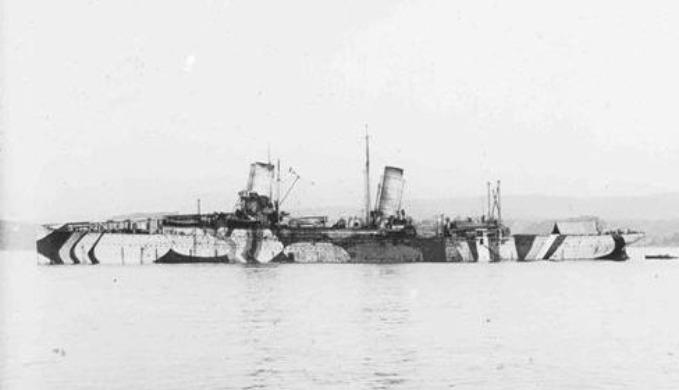 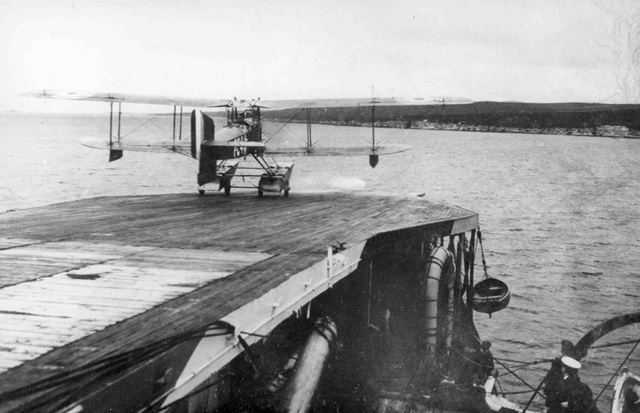 Argus was not completed before the Armistice. Elderly by the late 1930s and too small to be a front-line vessel, she was nevertheless re-commissioned for service in 1938, spending most of the Second World War ferrying aircraft to Malta and serving as an escort carrier. She survived to be broken up in 1946.

Vindictive had been converted from a carrier to a repair ship by the Second World War, in which capacity she served until being broken up in 1946.

Hermes served in the Mediterranean and on the China Station during the inter-war years. She had a somewhat brief and chequered career during the Second World War, in which she was involved in the attack upon the French fleet at Dakar, before being sunk by Japanese D3A dive bombers off Sri Lanka in April 1942. 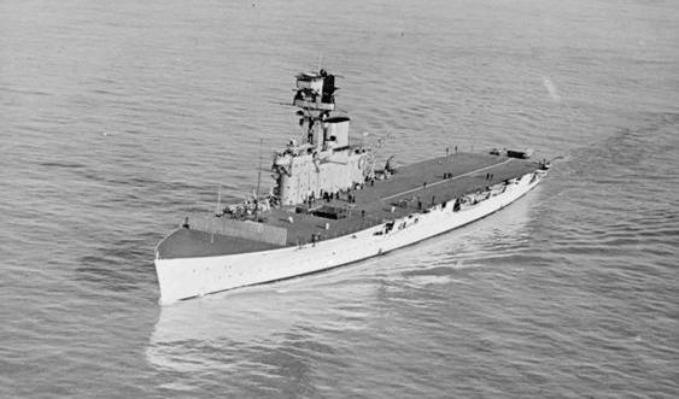 HMS Eagle saw extensive service before and during the Second World War, only to be torpedoed and sunk in 1942 while escorting Convoy Pedestal to Malta. 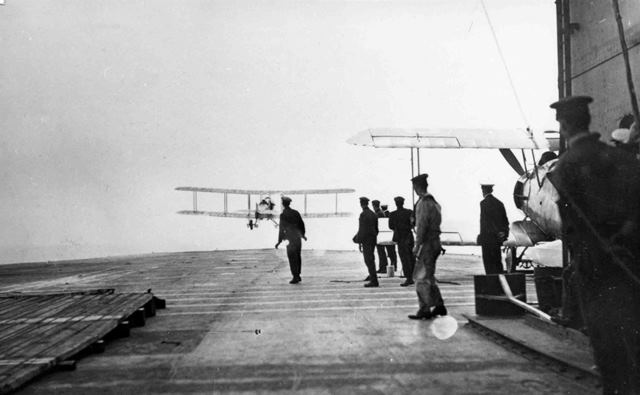 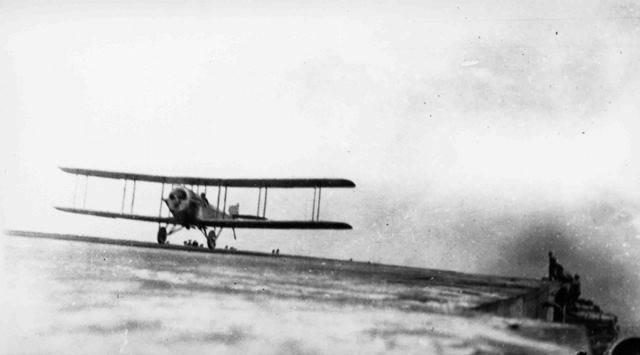 Glorious and Courageous, half-sisters of Furious, were only completed as aircraft carriers in the 1920s. Courageous was sunk by a U-boat in 1939 and Glorious succumbed to the Scharnhorst and Gneisenau off Norway the following year. 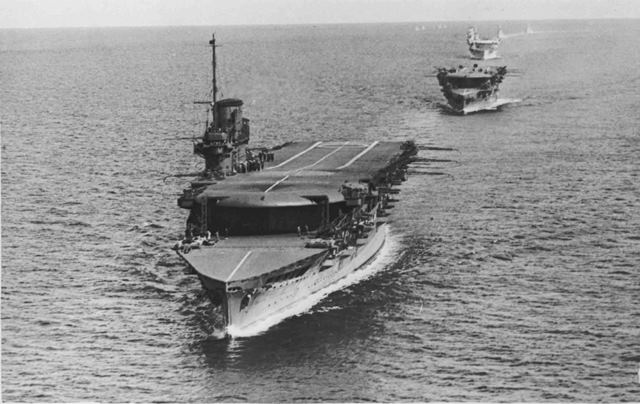 The planned aerial attack on the High Seas Fleet is now largely forgotten and the Cuckoo little more than an aviation footnote.

It is interesting to note, however, that the roots of the Fleet Air Arm’s raid on the Italian Fleet at Taranto in 1940 lay in the last years of the First World War. Final proof would come a year after Taranto, when the Japanese infamously showed that with enough aircraft, it was possible to deliver a devastating strike on a fleet in its own harbour.