The Few and the First Battle of Britain: Part 2

In an earlier post I investigated the ‘Zepp’ attacks, the response of the Royal Flying Corps (RFC) and Royal Naval Air Service (RNAS) and the public fear that these attacks arose. It was widely believed by 1917 that the airship menace had been conquered. However, another monster was on the horizon. This was the ‘Gotha’, a purpose-built bomber with a wingspan of 77 feet (12 metres) and measuring some 40 feet (12 metres) long. They were to take part in Operation Türkenkreuz (Turk’s Cross). This was the operational name given for the planned bombing raids on London. The aim of the Operation was to force the British government to negotiate and pull out of the war, being forced to do so by public opinion. The idea being that the morale of the British people would be destroyed by the bombing raids.

The man tasked with this was Hauptmann (Captain) Ernst Brandenburg, a veteran who had been wounded in the trenches in 1915 and subsequently took up a role in the army air service. In March 1917 he was appointed Commander of Kampfgeschwader 3 der Oberste Heeresleitung (Bomber Wing No. 3 of the Army High Command) or also known as the abbreviated Kagohl 3. Its three Staffeln (squadrons), each with 12 bombers, were based around Ghent in occupied Belgium. Unofficially, Kagohl 3 was known as the ‘Englandgeschwader’, the England Wing.

Brandenburg embarked on a major training programme for his Geschwader in preparation for the raids. The bombers were part of the ‘G’ series of aircraft, the ‘Grosskampfflugzeugen’ (large bomber aircraft) and were produced by the Gotha company. The Geschwader flew the G.IV which had a speed of 80 mph (128 km/h) and could fly as high as 18,000 feet (5,500 metres). With a wingspan of almost 78 ft (24 m) it was a colossus of the skies. Its two 260 hp Mercedes engines gave a distinctive hum, recalled by many who saw them flying overhead. 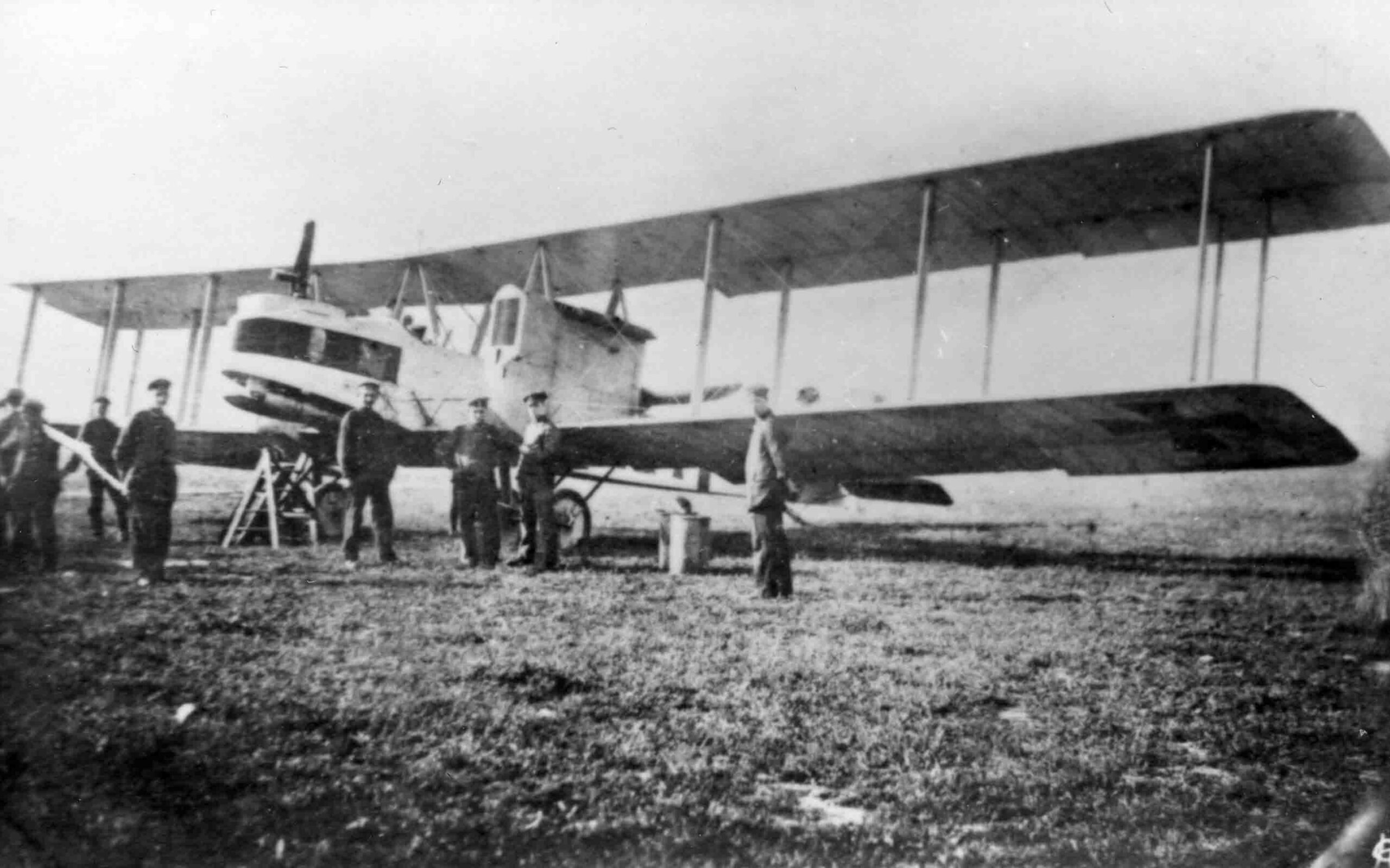 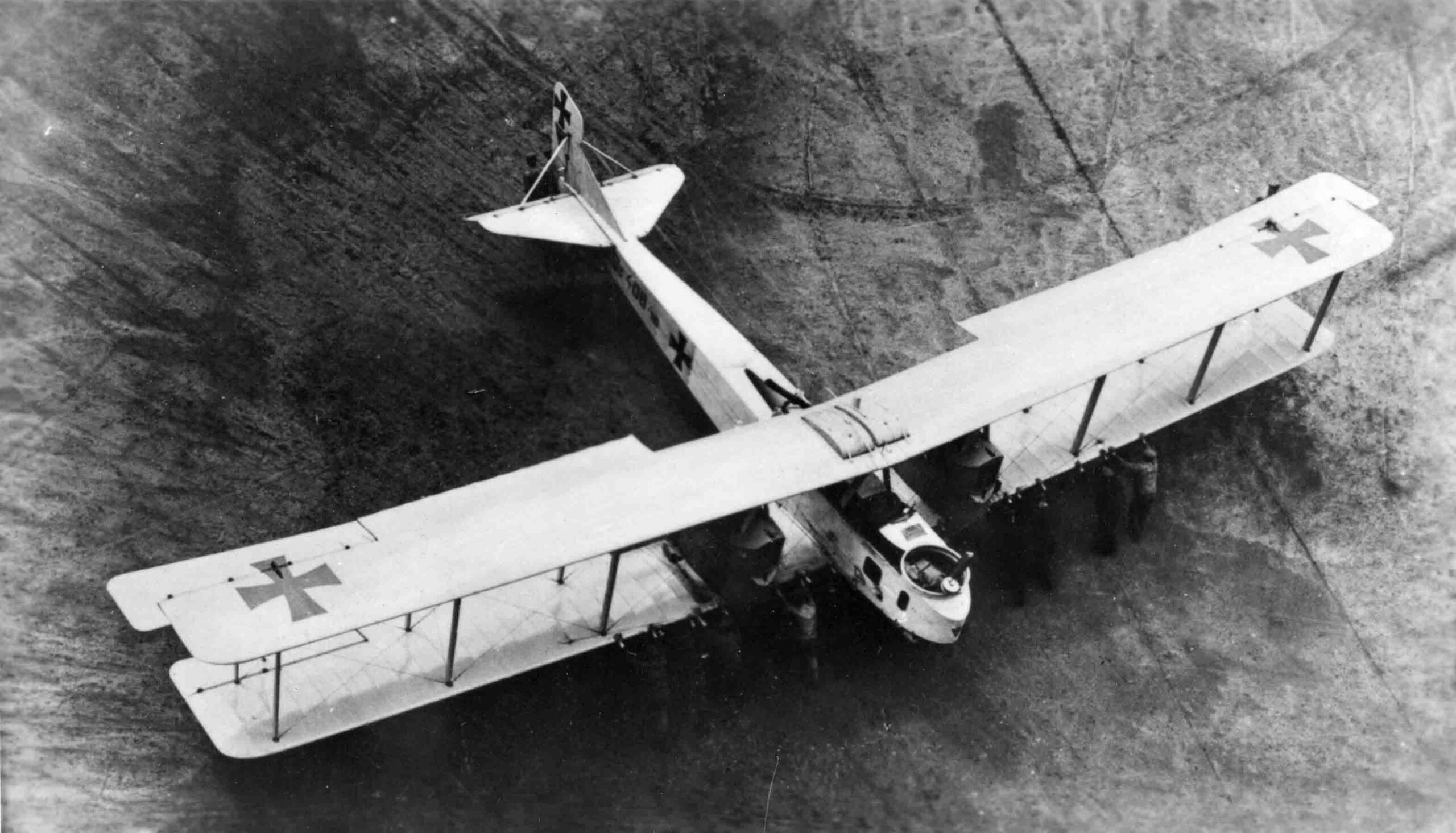 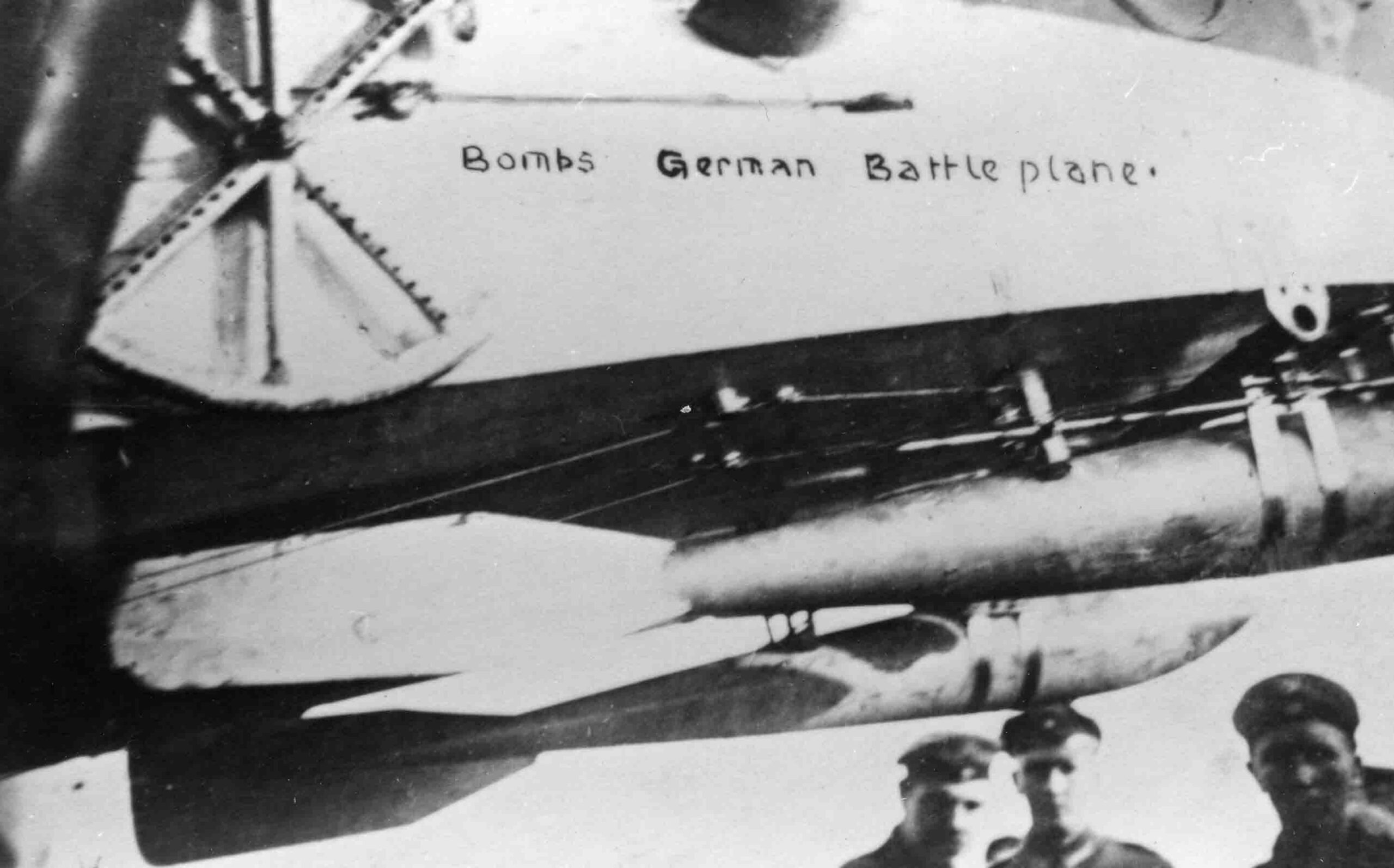 The Gotha G.IV had a crew of three, a commander, a pilot and a rear gunner. The aircraft was fitted with two machine guns and capable of carrying up to 400 kg of bombs. Although the crew flew in an open cockpit, exposing them to the elements, it was the most advanced and lethal bomber of its day. Crucially for Brandenburg and his Squadrons flying from Ghent in occupied Belgium, it had the range to reach London. Initially, they needed to refuel at an airfield close to the Belgian coast, but the Gothas were later fitted with extra fuel tanks, allowing an uninterrupted flight to London and back.

On the night of 6-7 May 1917, a lone Albatross C.VII flew over London at night, the first German aircraft to ever do so, and dropped five small bombs around the Holloway and Hackney area. One person died and two were injured. The aircraft returned to Belgium and encountered no opposition either from aircraft or anti-aircraft guns. This can justly be called one of a series of probing air raids designed to test Britain’s Home Defence system. 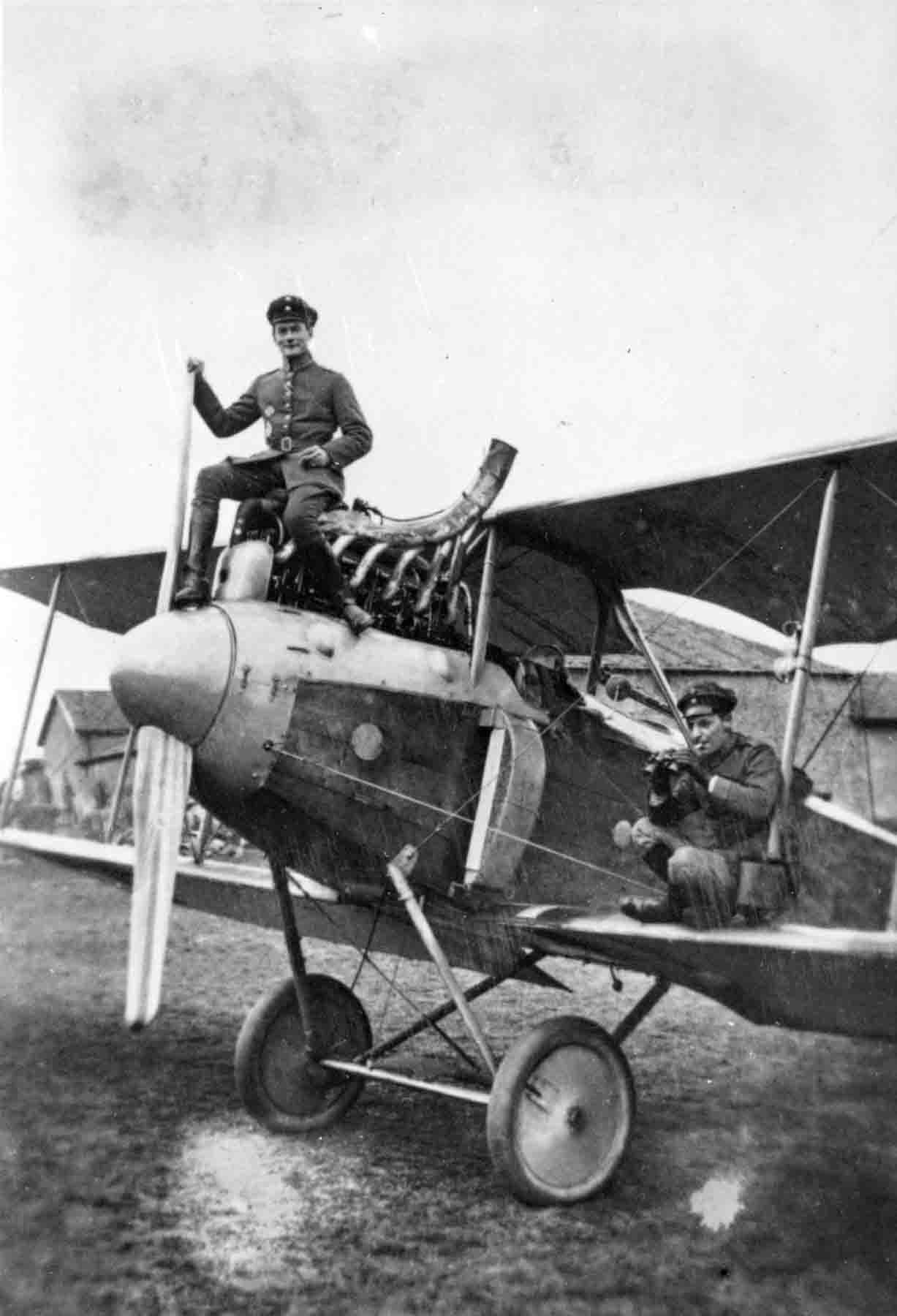 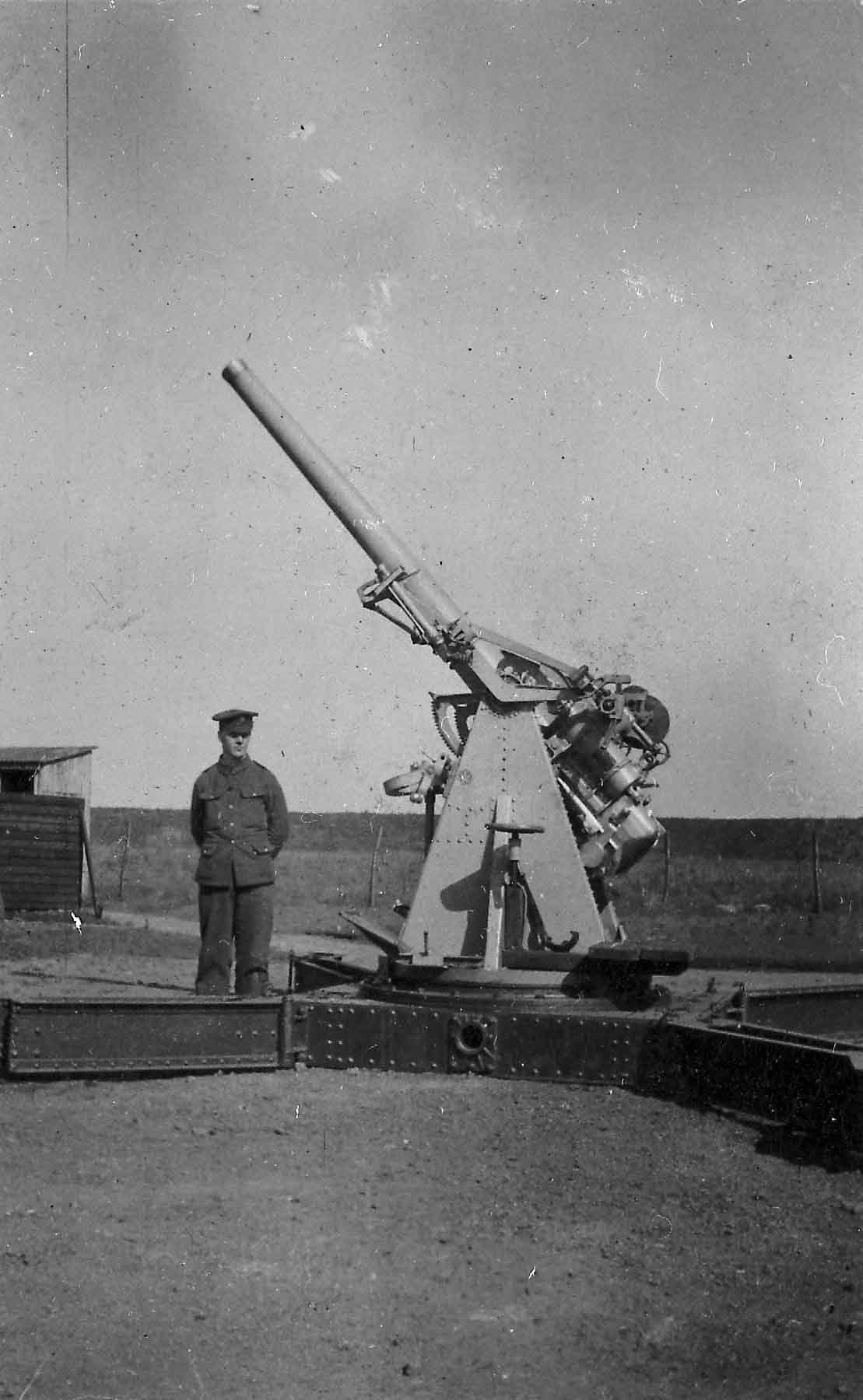 Due to the lack of Zeppelin raids and the need for experienced pilots on the Western Front the Home Defences had been scaled down. By March 1917, Home Defence pilots had been reduced from 130 to 71. Anti-aircraft coverage had also been drastically reduced with many being sent to be used by merchant shipping to help combat the German submarine threat. This followed a recommendation from Field Marshal Lord French, commander-in-chief of British Home Forces on 6 March 1917 that ‘No aeroplanes or seaplanes, even if recognized as hostile, will be fired at, either by day or night, except by those anti-aircraft guns situated near the Restricted Coast Area which are specially detailed for the purpose.’ The reasoning behind this strange recommendation was to free up anti-aircraft crews so they could be sent to the Western Front. After all it was thought that the airship menace had been seen off and that the Home Defence system, set up to deal with the Zeppelin raids was no longer required at such a scale. Although intelligence sources warned of an impending larger raid by aircraft, this was ignored. This raid by a lone aircraft was viewed as a one-off incident, with fatal consequences. 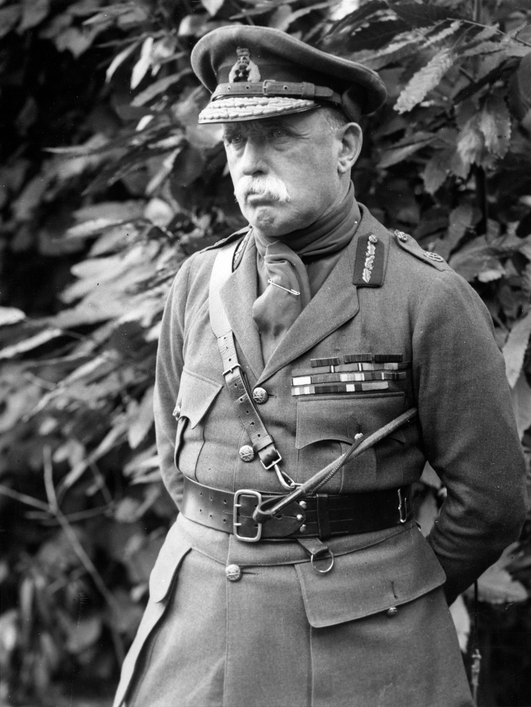 On 25 May 1917, 23 aircraft of Brandenburg’s ‘Englandgeschwader’ took off for their first raid on London. Brandenburg’s Gotha’s tail was distinctively painted blood red to distinguish it from the others. Signals would be given to other members of the Geschwader via his aircraft by hand signals or a coloured flare system.

The only thing that saved London from being bombed on this day was the weather. Low cloud covered the land and Brandenburg was forced to signal to his aircraft to head back and go for the secondary objective. These objectives were targets in Kent which was free of cloud cover. The railworks at Ashford were hit. Aircraft were scrambled from bases in Manston, Westgate, Stow Maries and Rochford but the rate of climb of the Royal Aircraft Factory BE12 was slow. Of the 74 aircraft that took off only two came within range. One pilot, Flight Lieutenant Reginald Leslie of the Royal Naval Air Service did manage to fire at a Gotha and hit it from less than a hundred yards range. His claim that it nose-dived pouring smoke went undetermined, but he was awarded a Distinguished Service Cross for his actions. It was also reported by pilots that at this rate of climb and altitude their engines were liable to burst into flames. 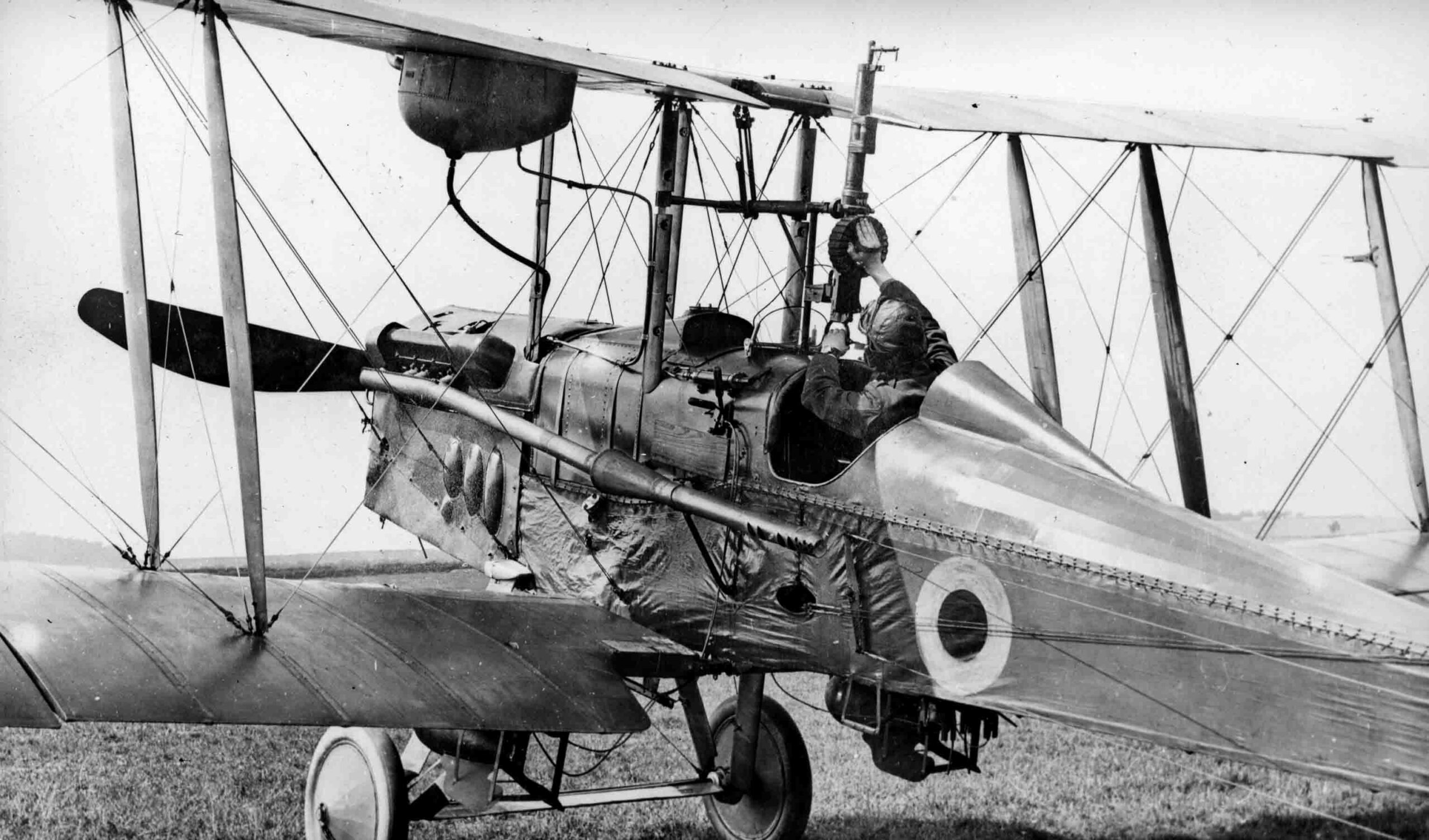 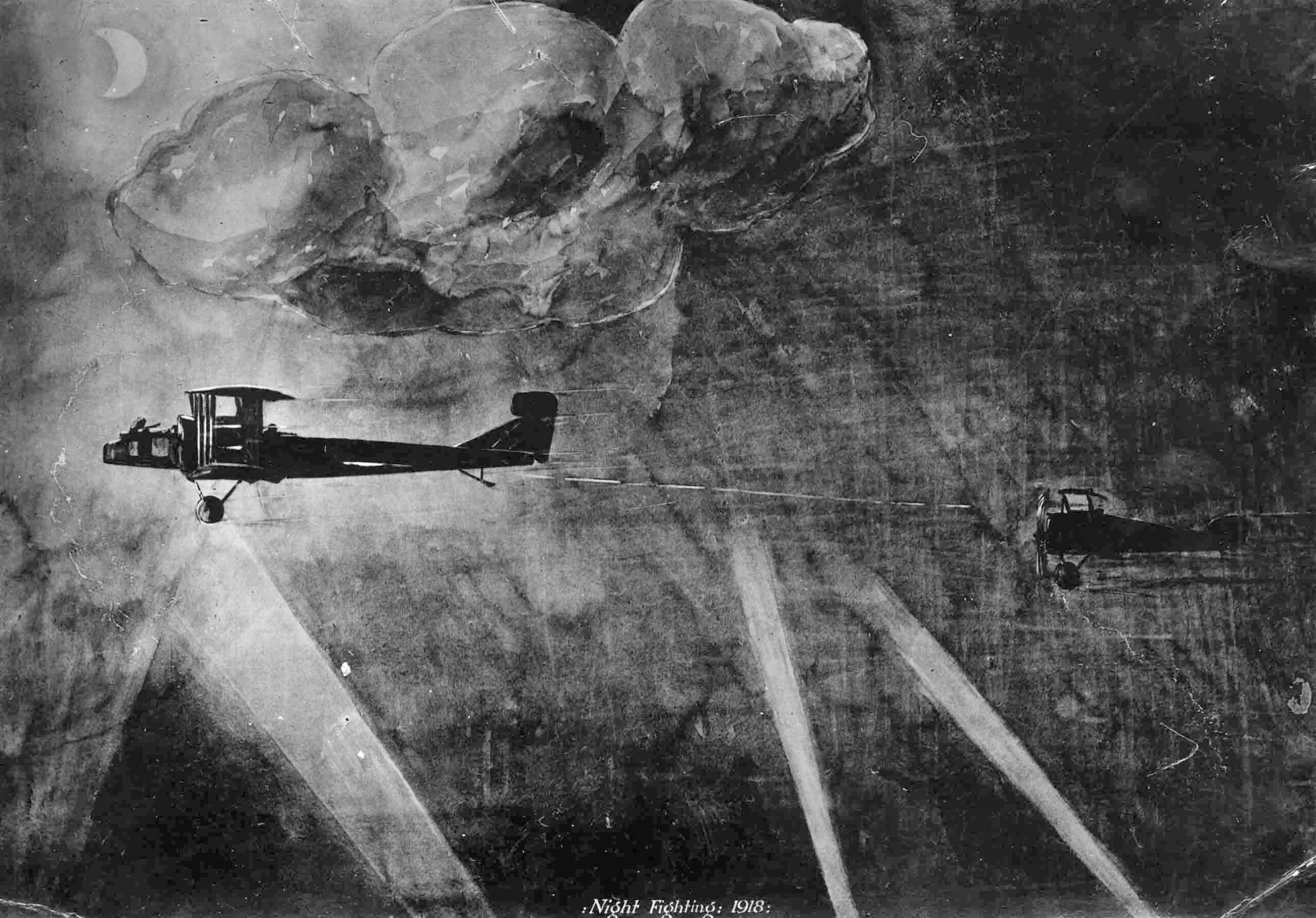 Flying over the Hythe Royal Flying Corps School of Gunnery the Gotha intruders dropped bombs which missed their main target and killed the verger of Hythe parish church and a member of the congregation. The vicar and his wife were injured. They then turned to Folkestone. It was a bright day and crowds were out, buying shopping, queuing for much needed food and enjoying the Whitsun holiday weekend. People recalled hearing the distinctive hum of the Gotha but had no reason to flee. There was no warning and one eyewitness saw two aircraft ‘emerging from the disc of the sun almost overhead. Then four more, or five, in a line, and others, all light, bright silver insects hovering against the blue of the sky…There were about a score in all, and we were charmed with the beauty of the sight. I am sure few of us thought seriously of danger.’ [quoted in Neil Hanson, First Blitz] 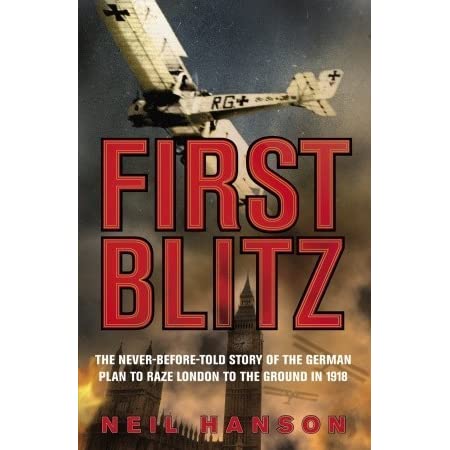 The crowds assumed these aircraft were British.

The first targets that were hit were west of Folkestone, bombs fell on Sandgate and the military camps at Shorncliffe and Cheriton. A group of Canadian infantry were assembled for evening exercise and a bomb fell in the middle of them, 93 were wounded and 17 died.

Folkestone then experienced the full horror of aerial bombing. 20 high-explosive and 30 anti-personnel bombs rained down on Folkestone and its population. They fell within the crowds causing carnage. The eyewitness reports are too graphic to reproduce even by modern day standards. 95 men, women and children were killed and 195 wounded. Many had mental scars that would never go away.

Brandenburg’s squadrons would release the rest of their bombs over Dover and only then encounter opposition in the form of anti-aircraft fire. Over three hundred shells were fired but none hit. No. 4 Squadron and No. 9 Squadrons based in Dunkirk did intercept the returning Gothas and shot one down. One other Gotha was also reported to have been shot down but later it was reported by a crew mate that the pilot had ‘gone mad’ after the bombing and crashed. 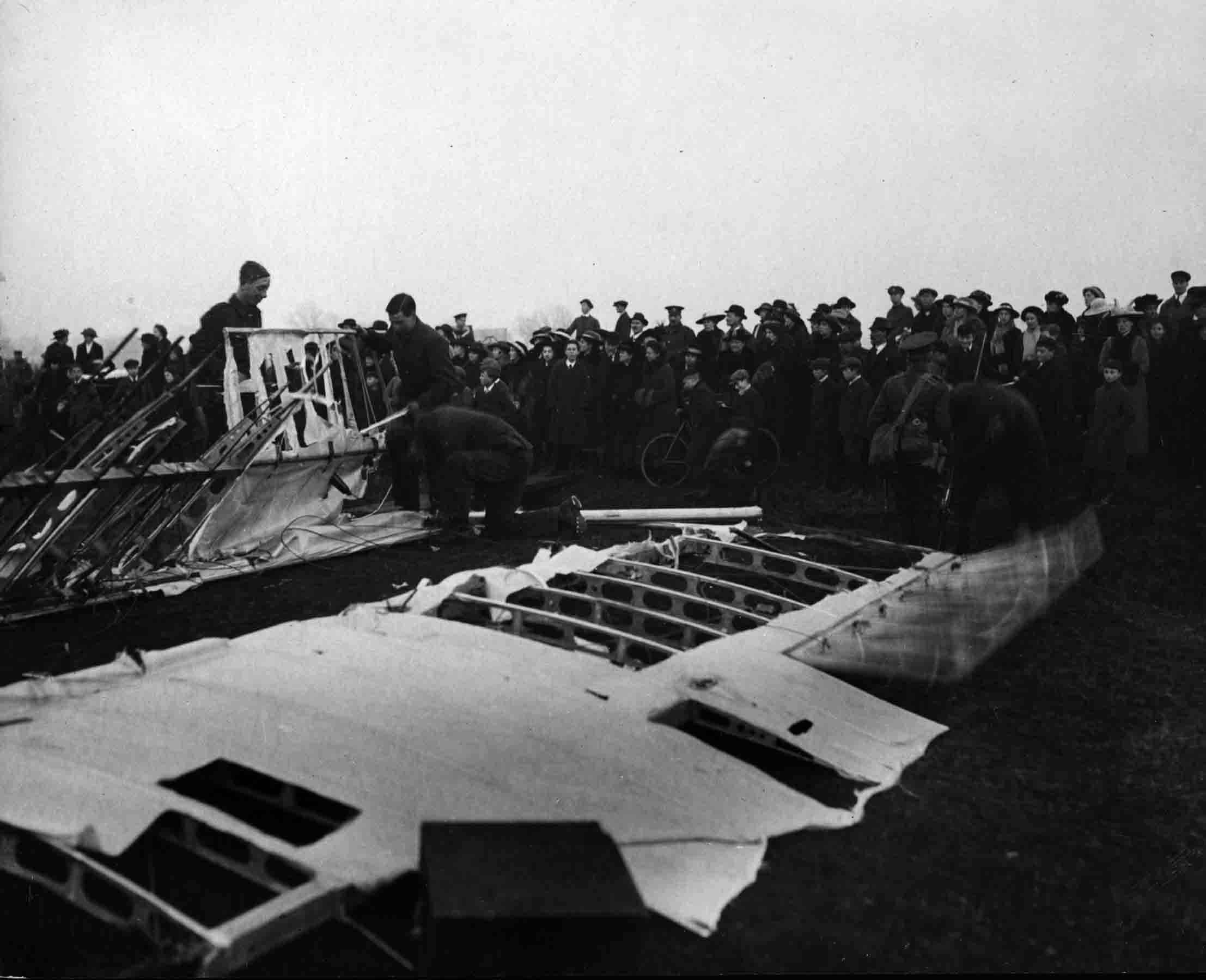 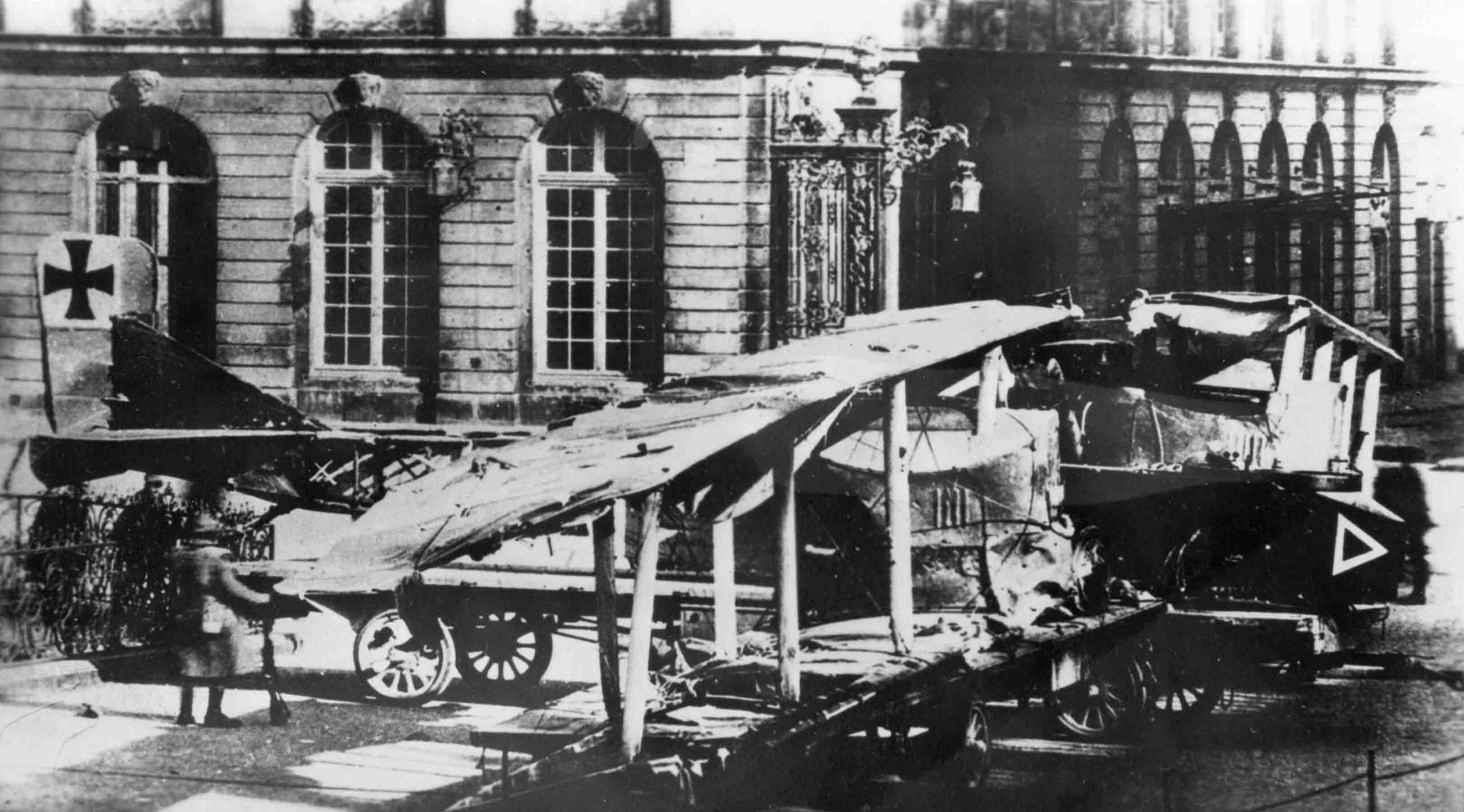 Like the previous airship raids, this raid caused outrage and the term ‘baby killers’ was once again seen in the press, German aircrews were depicted as degenerate. Demands were made from the public regarding defence and 20 aircraft were drafted into the Home Squadrons and experienced anti-aircraft observers redeployed from the battlefields of France to the Thames Estuary to watch for approaching bombers. This did not stop another raid taking place on the 5 June 1917 when 22 Gothas raided. Once again, the weather came to London’s rescue and secondary targets were hit. This time, these were the naval dockyards at Sheerness in Kent. As they flew towards their target they were spotted, and aircraft flew to intercept but could not reach them. The Gothas dropped 21 bombs and some anti-personnel mines at Shoeburyness. The majority of these fell on a beach and not the intended target of the munitions works and Army gunnery ranges. Two soldiers were however killed.
On the attack run towards Sheerness one bomber was shot down. The rest of the Englandgeschwader flew on and dropped 5,000 kg of bombs onto the target. Many hit the docks causing fires and the sinking of some small vessels. Several bombs did not explode, and such was still the novelty of this type of warfare that a group of soldiers had to be stopped from prodding an unexploded bomb with their canes.

Following the examination of the crashed Gotha, and the interrogation of its surviving airman which revealed the existence of the ‘Englandgeschwader’, Sir John French agreed that anti-aircraft could fire at enemy aircraft and RFC squadrons were drilled in taking off quickly so they could gain height in time, an early form of the famous ‘scramble’. However, all of these preparations would not stop the next raid. Brandenburg and his ‘Englandgeschwader’ had their sights firmly set on London…