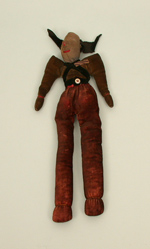 Gremlins were fictitious devilish spirits which made aircraft break down. They first appeared in the RAF during the Second World War. Problems with an aircraft would be blamed upon the work of the gremlins.

Airmen would combat the devilish gremlins by carrying mascots of lucky ones.

The author Roald Dahl, a pilot in the Royal Air Force during the War, wrote a children’s book about gremlins in 1943. Walt Disney then published a cartoon book based on Dahl’s characters, increasing their fame.

These two gremlins were used as lucky mascots by bomber crews during World War Two. The one with the long legs wears the medal ribbon of the Distinguished Flying Cross.