Preparations for the RAF Centenary development at the RAF Museum London have provided many challenges for the Museum’s Cosford based Conservation Centre (MBCC) team. Over the past eighteen months some fifty individual aircraft moves have taken place across both our London and Cosford sites, including several airframes which have been rotated into our Reserve Collection at Stafford. 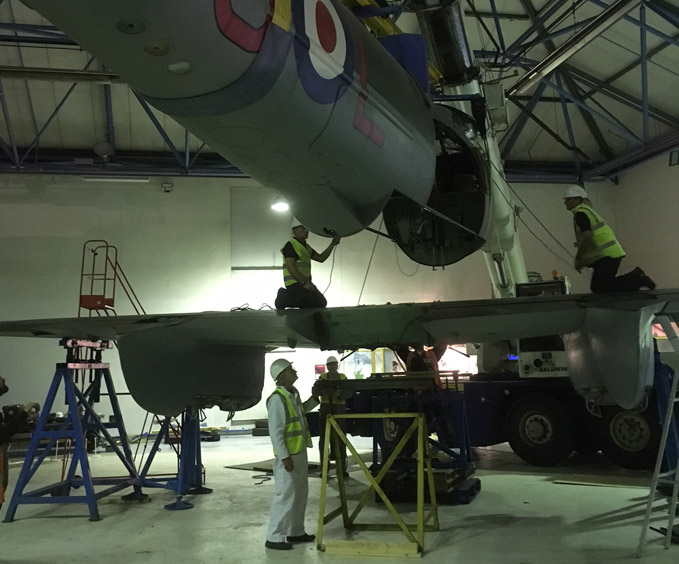 The work involved has ranged from the complete dismantling of airframes to simple repositioning of aircraft within their existing display environments. Each aircraft has its own individual needs and requirements; so much planning is needed prior to any move. This task involves consulting the relevant air publications to ensure any work is in accordance with procedures and practices relevant to each particular type, the compilation of the necessary Risk Assessment and Method Statement documents plus consultation with a wide range of stakeholders across the Museum to ensure everything flows with the minimum of disruption.

To aid this task we’ve been using the specialist knowledge and expertise of several external organisations such as GJD Engineering who dismantled and moved our Heinkel He 111, Messerschmitt Bf 110 and Junkers Ju 88. We’ve also been fortunate to receive support from the de Havilland Aircraft Museum at Salisbury Hall near St Albans. In a great example of inter-museum collaboration and volunteering partnership, a specialist team from Salisbury Hall recently assisted with the move of our de Havilland Mosquito B.35 TJ138 from ‘Milestones of Flight’ to the Bomber Command Hall. This was necessary as there is not sufficient space on-site to transfer the aircraft, in a complete state, between the respective buildings. 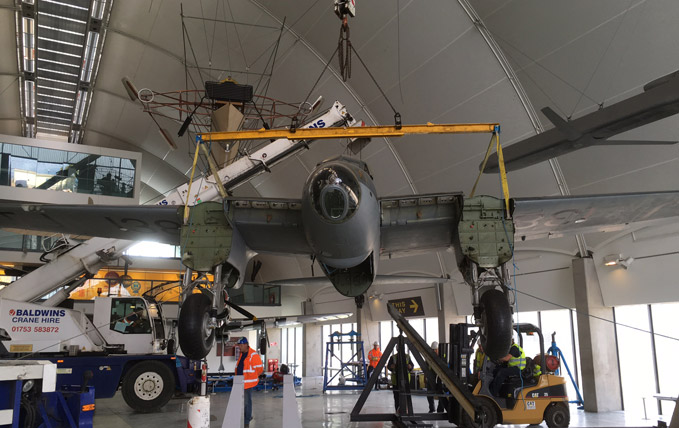 The Mosquito needs no introduction to the readers of our online blog but it is worth noting that it was originally designed as a high speed unarmed bomber relying on its performance to outpace defending fighters. This was a revolutionary concept when first proposed to the Air Ministry but, despite initial opposition, the Mosquito went on to become arguably the most versatile military aircraft of all time, a true ‘Jack of all trades’ but master of each and every one.

The primary structure of the Mosquito airframe was built of wood, an anachronism in the age of the metal monoplane but one which made great sense to de Havillands for they were well versed in building high performance wooden monoplanes such as the 1934 Comet Racer and the 1937 Albatross high speed mail plane/airliner. Wooden construction allowed a prototype to be produced quickly and utilised a vast untapped wood working industry for quantity production. 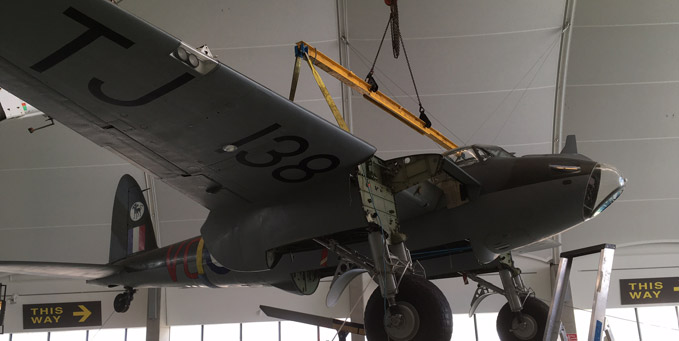 In this respect, the Mosquito was unique for a front-line combat aircraft as it was designed to be produced by the non-traditional aircraft industry i.e. cabinet makers and furniture manufacturers who, once they’d mastered working to the extremely high tolerances required, turned out Mosquitoes in their thousands. Additionally, as a non-strategic material, wood construction made very little demand on the hard-pressed metal industries of the day and allowed dispersed production across a wide range of sub-contractors.

Due to the intensity of the MBCC work programme, in January 2017 we approached the de Havilland Museum for assistance with the dismantling and move of the Mosquito. They were only too willing to assist and the Chief Engineer of their Mosquito Restoration Team, Gerry Mears, visited RAF Museum London for a series of meetings with MBCC Manager Darren Priday – through these a plan was put together and a method statement/risk assessment compiled for the aircraft to be moved later in the year. The de Havilland Museum is Britain’s oldest established aviation Museum and first opened its doors to the public on May 15 1959. 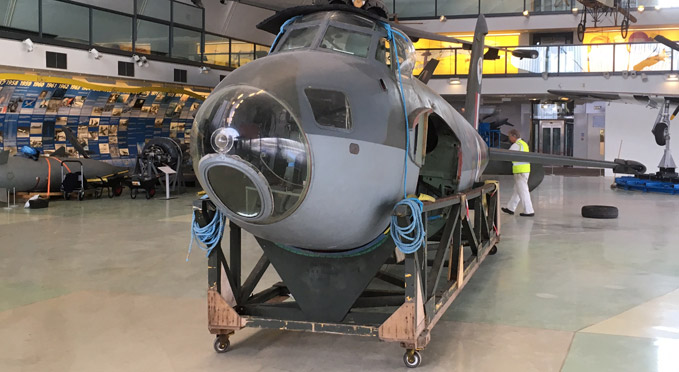 Based at the 17th Century manor house of Salisbury Hall near London Colney, the house was originally employed by de Havilland’s as a design centre for the Mosquito and five examples, including the original first prototype, were constructed there before quantity production transferred to the company’s main Hatfield Headquarters. The choice of Salisbury Hall was made for purely practical reasons, the house offered peace and security for the design team, away from the inevitable disturbances of the busy Hatfield factory plus the ever-present threat of enemy bombing.

The first prototype Mosquito, W4050, made its maiden flight from Hatfield on 25 November 1940 and served as a ‘test bed’ and research aircraft until its retirement in December 1943. Through what has to be termed a ‘miracle of deliverance’ W4050 survived to become the first exhibit (back at the land of its birth) at what was then known as the Mosquito Aircraft Museum. 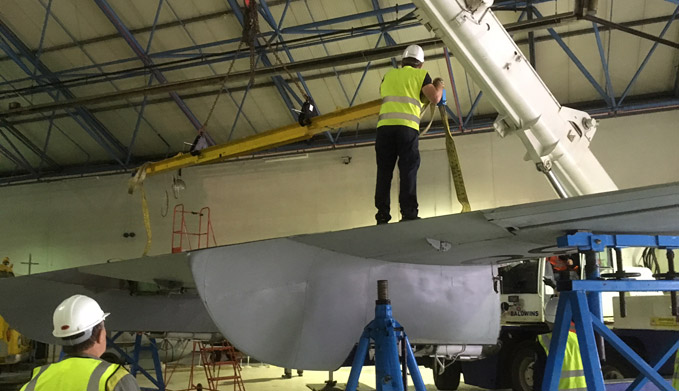 In 1970 another Mosquito joined the fold, TT.35 TA634, and this was complemented by the fuselage of FB.VI TA122 in 1978. Since then the Museum has grown to encapsulate all things de Havilland and remains the only place in the world where one can see three Mosquitoes in one location. The Museum is undoubtedly the UK centre of expertise on all things Mosquito, both from a technical and practical perspective. The in-house Mosquito Restoration Team have overseen the restoration and conservation of the TT.35 TA634, original prototype W4050 and are now in the final stages of completing FB.VI TA122, a truly international project encompassing parts from all over the world. In August 2017 the team oversaw the dismantling and reassembly of Tony Agar’s Mosquito NF.II HJ711 for its move from the Yorkshire Air Museum (Elvington) to the Lincolnshire Aviation Heritage Centre at East Kirkby, as such they are extremely familiar with the type! 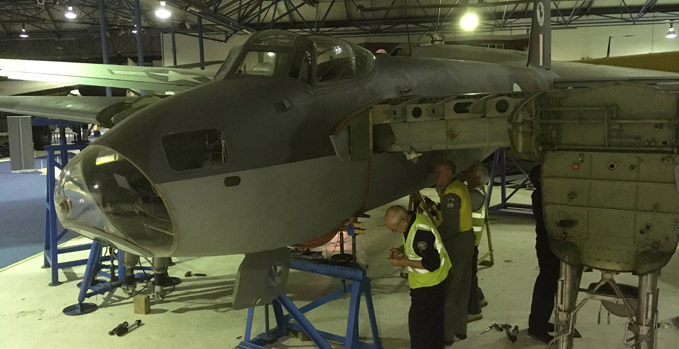 The de Havilland team also provided the specialist equipment required for the task including jacks, wing and fuselage trestles, fuselage/wing lifting beam plus the all-important ‘jury-strut’ necessary to brace the fuselage during its removal from/re-assembly to the wing. During the week prior to dismantling of the airframe, preparatory work had been undertaken by the MBCC including the removal of engine cowlings spinners, propellers plus the engines – this preparatory work was invaluable.

The team’s first task was to prepare the aircraft for removal from its display support frame in Milestones of Flight, once this has been accomplished the airframe could be lowered to the ground for dismantling to begin in earnest. The display support frame elevated the Mosquito some 10ft above floor level, this made the removal operation challenging as it would need to be a two-crane lift, one lifting the wing and centre fuselage while the other supported the aft fuselage at bulkhead number 5. Once the aircraft was suspended the support frame would be moved away and the aircraft safely lowered to the floor. Added to the challenge was the relatively confined space of Milestones.

However, by the end of Monday 13 September the airframe had been prepared in readiness for the lift which successfully took place on Wednesday 15. The team then prepared the airframe ready for the fuselage to detach from the wing. For strength, lightness and simplicity, the Mosquito wing is constructed in one piece and measure some 54ft from tip to tip. The fuselage and wing are connected by just four bolts, two (referred to as ‘Joint A’) on the forward top surface of the wing (accessible from the aft cockpit area) and two on the rear spar (‘Joint B’). 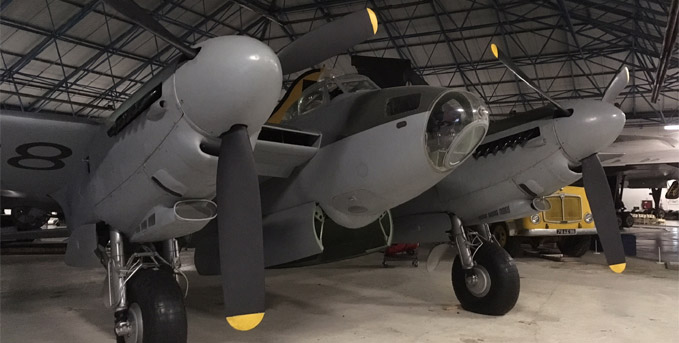 Once the fuselage had been lifted from the wing a jury-strut had to be installed to brace the ‘wing gap’ as this is the weakest point of the fuselage structure. On Friday 15 September this critical operation took place and, despite some initial complications, all went well and the fuselage was lowered into its bespoke transport cradle ready for transfer to the Bomber Command Hall. The wing was then lowered onto its transport cradle and moved to Bomber Command later that afternoon.

Following the weekend break, the de Havilland team began transferring the remaining Mosquito airframe components to the Bomber Command Hall on Monday 18 September, the fuselage following on the morning of Wednesday 20 September. During Wednesday afternoon reassembly of the Mosquito began in Bomber Command Hall, the aircraft now positioned to the port side of our B-17G Flying Fortress. Due to the restricted space available for the crane, re-uniting the fuselage to the wing presented some challenges but this, the trickiest part of the operation, was successfully carried out and the team finished work at 18.30.

Over the next couple of weeks the de Havilland team completed the reassembly of TJ138, the aircraft being lowered back onto its undercarriage on 13 October. As previously mentioned, this whole operation is a great example of inter-museum collaboration and volunteer partnerships – we are extremely grateful to the de Havilland Museum for looking after this iconic aircraft for us so well.

This blog was previously published in the winter 2018 edition of RADAR, the Museum’s Membership Magazine.