This is an RAF Museum event organised in collaboration with the University of Wolverhampton. 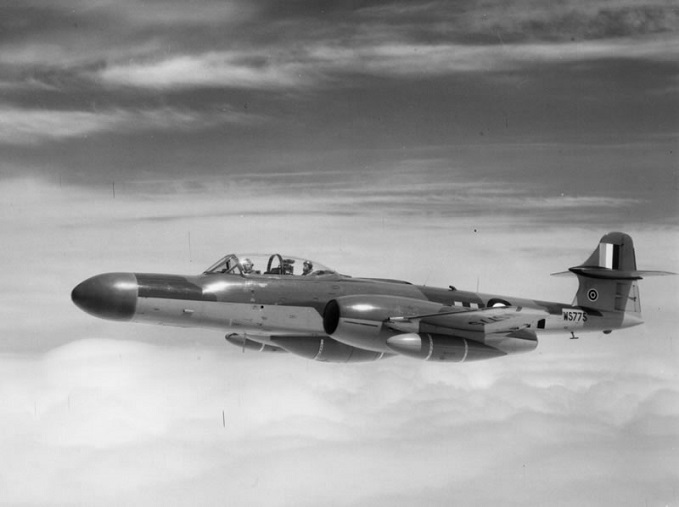 At the end of the Second World War, of the victorious nations the UK had an aircraft industry second only to that of the United States in terms of technological advancement. It had a notable lead in the development of jet engines and had produced a range of highly successful high performance combat aircraft. Knowledge of the German advances in design such as swept wings was available for adoption and exploitation. In short, there was the opportunity for Britain to maintain its place as a leading player in the design, development and fielding of advanced combat aircraft.

Post-war austerity was a limiting factor but it can be argued that there were greater adverse factors. The failure to rationalise the industry caused scarce funds to be spread thinly over too many programmes with the inevitable result of slow progress in a time of rapid change. There was a lack of strategic planning in determining achievable targets in combat aircraft performance and then in devising the means of achieving those effectively. There was also a failure to exploit the potential of promising aircraft and engines while extending the lives of obsolescent types. The result was that by 1950, the UK was no longer competitive in fighter aircraft having failed to maintain its strong position from 1945.

The focus on developing the V-bombers to carry the planned deterrent reduced the funds available elsewhere but the ‘insurance policy’ of developing and also adopting competing designs (of bombers and fighters) incurred high costs of debatable value. The ‘stop-go’ approach adopted was inefficient and resulted in inefficiency and ineffectiveness. For example, a rational post-war combat aircraft development programme would have enabled the UK to field a competitive fighter in the Korean War; the means were available but the opportunity was lost.

The lecture will take place at the University of Wolverhampton, in the MA Wulfruna Building, on Thursday 18 November 2021. This lecture will begin at 5.15PM.

Paul Stoddart was commissioned into the Royal Air Force in 1983 and served as an aero-systems engineer officer for eight years.  He served on the VC-10 and Hawk and as directing staff on Initial Officer Training at the RAF College Cranwell.  After leaving the Air Force, he worked as a journalist on a car magazine and as a teacher of English as a foreign language before joining the Ministry of Defence as an analyst.  He then worked at Farnborough on the Tornado successor programme and Boscombe Down as the programme manager for the Harrier and Sea Harrier trials clearance projects.  His final role at Boscombe Down was as the programme manager for the Jaguar.

Paul then attended the Advanced Command & Staff Course at the Joint Services Command & Staff College at Shrivenham from 2000 to 2001 gaining an MA degree in Defence Studies from King’s College London.  He took up his current post as an operational analyst for the RAF.  Paul is a Fellow of the RAeS and a member of the RAeS Air Power Group committee.  He has written and lectured on a range of air power and military aircraft subjects, most recently organising RAeS conferences on the1943 Dams Raid (17 May 2018), the future of UK air power (19 Nov 2018) and a review of air power in 1944 north-western Europe (15 May 2019). He presented the RAFM Trenchard Lecture at the University of Wolverhampton in November 2019 on the utility of air power at the strategic level.