As part of the Museum’s transformation in 2018 to celebrate 100 years of the Royal Air Force, the Heritage Lottery Fund has funded a new STEM (Science, Technology, Engineering and Maths) Learning Programme.

The Learning Programme at the RAF Museum aims to engage learners of all ages with the story of the RAF. Having for many years run a popular programme of largely history-based workshops, a new STEM strand has been developed to complement the new Centenary exhibitions at our recently revamped London site. Engaging children and young people with the science and technology of aircraft innovation – and sharing with them the stories of the RAF people behind these technological advances – has been the driving force behind the development of a range of new workshops, activities and resources.

One project in the new programme began with a simple brief: ‘create resources to help adults discuss STEM concepts with children.’

In this blog we would like to explain what solution we have found for this challenge and at the same time reveal how a hippo and a humming bird have helped the Museum do that.

First of all, we invited students from the FdA Teaching and Learning course at Middlesex University to our London site back in 2017 and gave them the project brief. As the students all work as Teaching Assistants in schools, they are used to thinking about interesting ways to engage children with complex subjects. With their ‘adult who might be asked questions they can’t answer’ hats on, they took a look around the Museum, identifying the sort of questions children might ask about the aircraft.

The students submitted a wide range of creative responses to the brief but one concept cropped up more than any other; the comparison of aircraft and flying creatures. We now had a theme; biomimicry.

Biomimicry is design inspired by nature. Yes, bats and planes both fly, but did you know that both use a similar method to find their prey? The RADAR antennae on the front the Museums’ Messerschmitt BF110 work a bit like a bat’s SONAR.

Like humans, hippos and fabric covered aircraft such as Hawker Hart can be damaged by harmful UV rays from the sun. Hippos make their own sunblock which is secreted through their skin. Fabric covered aircraft need a special layer of aluminium dope (this looks like silver paint) to protect them. 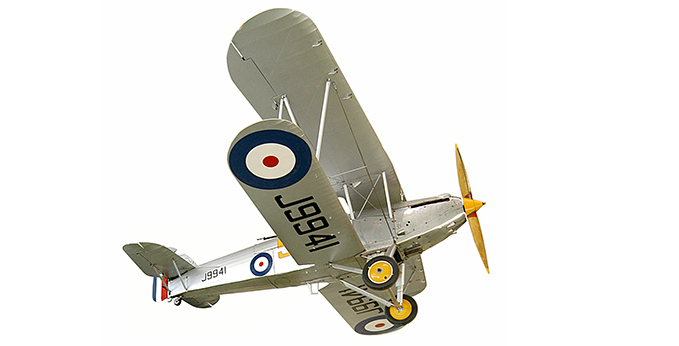 We chose eight aircraft – from our collection of over 80 on display- where aeronautical designers could have found inspiration in the animal kingdom. In addition to the bat and the hippo, we found links between a hummingbird and our Westland Whirlwind; the bumble bee and our Avro Anson; a robin and our Supermarine Spitfire; a tiger moth and our de Havilland Mosquito; a peregrine falcon and our Panavia Tornado F3, and a snow leopard and our EH101 Merlin helicopter.

It was one thing identifying the similarities between animals and our aircraft, and we could have settled for text panels which explained these to visitors. Then we thought how much better would it be if there were models of the animals for our visitors to look at.

Colindale Primary have been our partner school throughout our RAF Centenary transformation programme, so we asked their Year 6 pupils to get involved in the project. I visited the school earlier in the year to introduce the project to the children and explain a bit about biomimicry. During the summer term Colindale pupils worked closely with art and design students from the North London Grammar School to create the amazing animals now on display.

In July 2018, all the project partners were invited to the Museum for an opening party. One of the most rewarding parts of the project was seeing just how excited they were to see their work on display in the RAF Museum London.

So why not visit to see the fantastic animal sculptures and find out a bit more about biomimicry and aviation? Our London site is open daily from 10.00am. Admission is free.

While I’m developing learning programmes and resources, I am lucky to be able to work closely with the RAF Museum’s fascinating collections, but by far the most rewarding part of my role as an Access and Learning Officer, is sharing RAF stories with a range of visitors, from schools to U3A groups.