Earlier this week, the Chelsea Foundation hosted a private event at the Royal Air Force Museum (RAFM) in London to celebrate the continued partnership between the two organisations and to support the RAF Museum’s development of the Hidden Heroes project. The partnership, funded by Club Owner Roman Abramovich, forms part of Chelsea’s Say No To Antisemitism campaign.

The evening featured guest speakers and an opportunity for guests to explore the RAFM Bomber Command display, featuring the RAFM Avro-Lancaster Bomber. The guests learned about the Jewish Hidden Heroes project, which is an initiative of the RAF to raise awareness about the untold stories of Jewish personnel in the RAF during the Second World War. These heroes joined the Royal Air Force from all over the world to fight against tyranny, racism and antisemitism, fully aware that they risked torture and execution if captured.

Respects were also paid during the evening to the last surviving pilot from the RAF’s ‘Dambusters’ squadron, Benny Goodman, who died last week at the age of 100. Benny was awarded France’s highest honour after carrying out 30 operations against enemy targets in the Second World War. Both Chelsea FC and the RAF send their condolences to his family.

Bruce Buck, Chairman of Chelsea FC, opened the evening welcoming guests to the iconic space. Bruce was followed by Sir Andrew Pulford, Chairman of RAF Museum, who spoke to the importance of the project and thanked Mr Abramovich for his continued support. Maggie Appleton, MBE, echoed Sir Andrew’s gratitude to Mr Abramovich and spoke about the new Bomber Command displays, which in 2023 will include the Jewish Hidden Heroes stories.

A panel discussion followed, featuring Chelsea Chairman Bruce Buck; Joshua Levine, JHH Historian; and Tim Langton, Senior Barrister at Goodman Derrick LLP and whose father was a JHH Bomber Command and left well-documented accounts of his experience. We were then honoured to be joined by Michael Heaton, who aged 97, joined the panel on stage to recount his experience in the RAF and the impression it left on him.

To learn more about the Jewish Hidden Heroes project,  head to the Museum’s RAF Stories website. 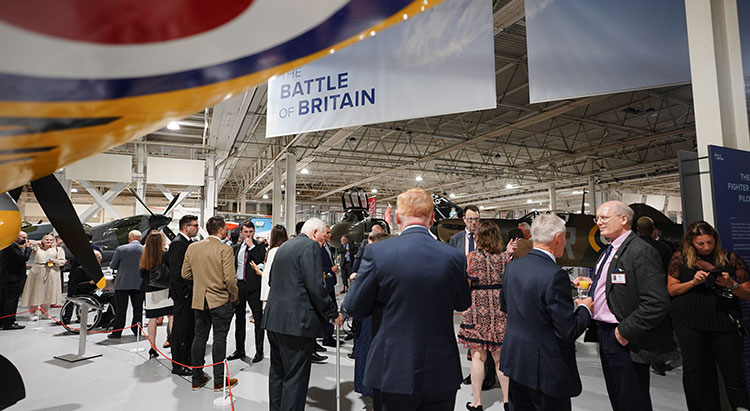 The event was the latest in a series of initiatives with the RAF Museum, supported by the Chelsea Foundation and Roman Abramovich. Previous collaborations include:

2018 – Sponsored the Jewish Hidden Heroes (JHH) project, to support CFC Foundation’s Say No to Antisemitism campaign, which consisted of a dedicated digital platform for JHH within RAFstories.org. The Museum has collected a significant amount of JHH stories and have included Jewish stories in the new Battle of Britain 80 displays.

2019 – Adoption of the Lancaster Bomber in honour of the Jewish Contribution to the Second World War.

2021 – Extension of the JHH project with the following initiatives: