Lecture: The RAF and the Battle of France, 1940: A Case Study in Military Effectiveness

Cliff Lloyd (University of Wolverhampton) examines the RAF’s military effectiveness during the campaign for France in 1940 through archival research and a structured, systems-based approach. This free lecture, hosted live at the Royal Aeronautical Society at 6PM on 3 November, can be attended in person or virtually. 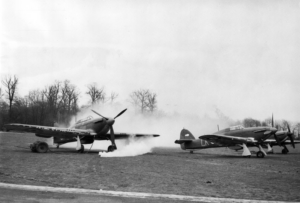 In 1961 J.F.C Fuller hypostasised that: “In recent times the art of healing has been placed on a scientific footing, the conduct of war has remained in its alchemical stage”. To test the validity of that statement, this paper examines the RAF’s effectiveness during the campaign for France in 1940 – widely acknowledged as poor – by augmenting traditional research methods with a more structured, systems-based approach.

This paper will argue that the complexity and diversity inherent in the examination of military performance may require historians to adopt more structured methodologies designed to understand the scope of the topic and any interconnectivity that may exist between elements of military effectiveness. To illustrate the point the RAF’s performance will be conceptually modelled based on Ludwig von Bertalanffy’s General Systems Theory (GST).⁠

To test the conceptual model as a potential tool for historical analysis, this paper will thereafter examine how the British and French integration and strategy prior to the outbreak of the Second World War affected the military effectiveness of the Royal Air Force forces in France during the period of the Phoney War and Fall Gelb.

To conclude the usefulness and significance of the conceptual model and GST as an analytical tool for multi-faceted historic research will be reviewed.

This lecture will be held at the Royal Aeronautical Society, No. 4 Hamilton Place, Mayfair, London, W1J 7BQ, on Thursday 3 November 2022.

This lecture will begin at 6PM. Tea and Coffee will be available beforehand.

In-Person: This lecture is free to attend in-person but registration is required. Booking is quick and easy:

Virtually: This lecture is free to attend virtually via the RAF Museum’s Crowdcast channel.

Cliff Lloyd is currently completing a PhD at the University of Wolverhampton researching the effectiveness of RAF operations during the campaign for France and the Low Countries (1939 –1940).

Prior to his PhD, and following a successful career in IT, Cliff gained an MA from Birmingham University and authored two books Operation Ironclad – The British Invasion of Madagascar 1942″ and “Iraq 1941”, including the Iraqi insurrection of Rashid Ali and the epic defence of RAF Habbaniya by No.4 FTS.

Cliff frequently speaks at the Manchester Military History Society and other local historical groups and prior to COVID, regularly conducted a range of battlefield tours in Europe and the UK.

Cliff’s historical interests include; airpower 1939 – 1945, war on the periphery, the British withdrawal from Empire and not least, mechanisms for measuring and analysing the effectiveness of armed forces.

About the RAF Museum research programme

About the Royal Aeronautical Society