At 6PM on Thursday 4 August 2022, Ken Delve will discuss the Desert Air Force, the development of tactical air power, and the leadership strategies and execution that made it effective and the key to success in the Desert War. The lecture will be live-streamed online via Crowdcast. 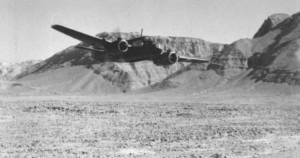 In the vast area covered by the ‘Middle East’ theatre – stretching from the western Mediterranean to the centre of Africa, air power played a crucial role in almost every campaign. Campaigns within the Middle East / Mediterranean theatre went well for the British whilst they were engaged against the Italians, although these forces were invariably larger and better equipped; however, the arrival of combat experienced German forces in 1941 was a turning point which almost brought disaster.

A point that must be made is the degree of contribution made by the South African Air Force (SAAF) in most of the campaigns in this theatre; in the later stages of the war in the Middle East and into Italy numerous SAAF squadrons operated within the Allied Air Forces, often as integral parts of RAF Wings (or vice versa).

The main battle ground was a narrow strip adjacent the coast, and which stretched for over 1,000 miles; the distance from Alexandria (in the East in Egypt) to Tripoli (in the West and 100 miles or so from the border with Tunisia) was roughly the same as Berlin to Moscow. The ‘war of logistics’, the need for airfields, the protection or disruption of logistic routes and hubs, were of critical importance in this theatre.

The development of tactical air power, and the leadership strategies and execution that made this effective were key to success in the Desert War, and the lessons were subsequently applied in the North Africa and NW European campaigns.

Ken Delve served 20 years in the Royal Air Force as a Navigator and during that time developed his passion for aviation and military history. Tours included the Canberra PR.9 (39 Sqn), Tornado GR.1/1A (IX Sqn and II Sqn), as well as time as a Navigation Instructor, and attachment to the RAF Museum for the Bomber Command Museum Appeal.

From researching and publishing the history of his first squadron – 39 Squadron, he has subsequently written over 50 books and numerous articles. His most recent work is a 3-volume set covering the Desert War, Malta’s offensive role, and the campaign in Italy.

Having left the RAF he became editor of FlyPast magazine, and later Editor in Chief at Key Publishing. This was a fascinating period with opportunities to meet veterans, warbird owners and enthusiasts. Ken is also the founder of the Aviation History Research Centre, which aims to provide a sharing forum for information and the preservation of historic documents and photographs relating to the RAF. He is a Trustee of the RAF Heraldry Trust, a researcher and guide at the RAF Museum Aviation Heritage Centre, and coordinator of the Military Aviation Heritage Networks.