At 6PM on Thursday 7 July 2022, Paul Stoddart considers the strategic, operational, technological and human aspects of the RAF approach to fighter escort and how it missed a major opportunity that might have helped shorten the war. The lecture will be live-streamed online via Crowdcast. 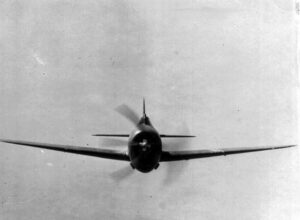 In the Battle of Britain, RAF Fighter Command achieved lasting fame through the efforts of ‘The Few’ to contest and win control of the air. Thereafter, Fighter Command fades from the history of RAF operations in the Second World War with the focus shifting to Bomber Command’s night campaign against Germany.

After 1940, Fighter Command continued to be allotted significant resources despite the many demands of other theatres and roles. Yet these considerable reserves of aircraft, pilots and the associated support facilities achieved relatively little during the rest of the conflict. Fighter sweeps were flown extensively over northern France in 1941 though these efforts were costly and unproductive. Ironically, a potential highly important role for Fighter Command was never seriously considered and a great opportunity was lost.

The United States Army Air Forces’ 8th Air Force flew extensive daylight bombing missions from late 1942 incurring heavy losses during missions deep into Germany. Senior USAAF commanders demanded why Fighter Command’s very large fleet of Spitfires could not provide escort to 8thAir Force’s bombers. However, the Air Ministry’s response was based on its doctrine-based policy that long-range fighter escort was not viable. This doctrine was applied dogmatically and little attempt was made to analyse whether the concept was achievable. This view persisted even when the USAAF proved that it was.

The eventual effectiveness of the 8th Air Force’s daylight campaign was made possible through long-range escort fighters such as the P-47 thunderbolt and P-51 Mustang. The Americans also modified a Spitfire to greatly extend its range yet the Air Ministry’s response was less than enthusiastic.

This paper considers the strategic, operational, technological and human aspects of the RAF approach to fighter escort and how it missed a major opportunity that might have helped shorten the war.

Paul Stoddart was commissioned into the Royal Air Force in 1983 as an aero-systems engineer officer.  He served on the VC-10 and Hawk and as directing staff on Initial Officer Training at the RAF College Cranwell.  After leaving the RAF, he worked as a journalist on a car magazine before joining the Ministry of Defence as an analyst.  He was at Farnborough on the Tornado successor programme and Boscombe Down as the programme manager for Harrier and Sea Harrier clearance trials.  He attended the Joint Services Command & Staff College gaining an MA degree in Defence Studies from King’s College London.  Paul is a Fellow of the RAeS and a member of the RAeS Air Power Group and Aviation Heritage Group committees.

He has written and lectured on a range of air power and military aircraft subjects. He organised RAeS conferences on the 1943 Dams Raid, the future of UK air power and air power in 1944 north-western Europe. He presented the RAFM Trenchard Lectures at the University of Wolverhampton in November 2019, on the utility of air power at the strategic level, and In November 2021, on RAF aircraft procurement 1945 to 1955.