At 6PM on Thursday 26 May, Brandon Lewis will explore the importance of Sir David Henderson and his role in the creation of the Royal Air Force. 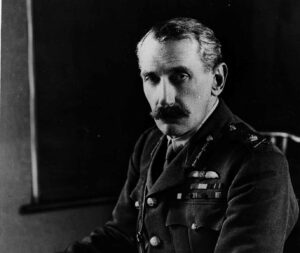 This lecture will establish that the ‘Father of the RAF’ was Lieutenant-General Sir David Henderson and not, as is often argued, Marshal of the Royal Air Force Sir Hugh Trenchard. Trenchard is the figure most associated with the creation of the RAF due to his position as the first Chief of the Air Staff.

Trenchard is often seen as’ Father of the RAF’, because of his role in establishing the foundations of the RAF and his staunch defence of the independence of British aviation. However, this lecture will demonstrate that although Trenchard was vital in furthering the role of the RFC and securing the independence of the RAF, he should not be regarded as the father of the RAF. As will be discussed, Trenchard was, at times, openly hostile to the creation of an independent air service and even went as far as describing the decision to create the RAF as ‘deplorable.’

To establish the importance of Henderson, and his relative claim to be considered the ‘Father of the RAF’, this lecture will demonstrate that Henderson was vital at every stage of the development of the RFC to the RAF and establish that it is Henderson whom we should consider the true Father of the RAF. Henderson was one of the first in Britain to see the role an independent air force could fill, and he was of the principle advisors and contributors to the two Smuts reports thereby shaping the founding documents of the RAF. Without his steadfast work, the RAF would have never existed.

Brandon Lewis was awarded a First-Class degree from Northumbria University in Newcastle in 2020, before undertaking an MA in History where he achieved a commendation. Both his BA and MA dissertations focused on the history of the RAF in the early decades of the twentieth century. His original dissertation focused on the creation of the RAF, he examined how the RAF came into being by tracking its history from 1911 to 1919. This work focused on David Henderson and how he helped create many of the ideas which would one day embody the RAF. His second dissertation focused on the how the RAF was secured in a peace time role and the Imperial history of the RAF.

Brandon intends to pursue his interests in the history of the RAF further by undertaking a PhD where he will expand on his original dissertation on the creation of the Royal Air Force and its forgotten father, David Henderson.