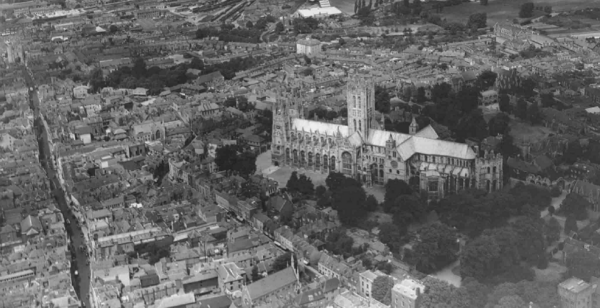 At 6PM on Thursday 9 June 2022, Dr Stephen Moore will discuss the history and influence of the Baedeker raids on Britain in 1942. The lecture will be live-streamed online via Crowdcast.

The series of attacks popularly remembered as the ‘Baedeker raids’ took place from April 1942 in response to the beginning of the British area bombing campaign.

The term ‘Baedeker‘ had become synonymous with ‘guidebook’ for middle-class North European travellers during the early twentieth century, and after German propaganda defined the renewed offensive as attacks on British culture chosen from buildings marked with three stars in its pages, it ensured a ‘notorious association’ of the guide with this series of raids ever since.

The campaign was also mistakenly used as a comparison when Donald Trump threatened to bomb Iranian cultural sites in January 2020. The autumn 1941 Luftwaffe offensive against ports which has been practically ignored by the historiography had targeted industrial or communications objectives, and there is evidence that many alleged Baedeker objectives were attacked for the same reasons.

Although primarily remembered for the spectacular damage caused during the attacks at Bath, the military significance of this campaign was practically non-existent. The success of German propaganda can be gauged by the extent that Baedeker is present in British documents by the end of April 1942 and is still used in the 21st century.

The slight losses of the Luftwaffe during the initial phase did not continue, as improvements in aircraft and radar systems meant that Fighter Command soon inflicted unsustainable losses to the attackers.

The much-publicised campaign against ‘cathedral cities’ caused serious damage to only one (Exeter) and minor damage to another cathedral church (Bath Abbey), illustrating that the whole concept of Baedeker was fundamentally flawed.

Sporadic raids throughout the early summer peaked with an attempt by the Luftwaffe to revive the offensive with a series of attacks against the Midlands which led to even greater losses and effectively ended German bomber operations for the rest of 1942.

Stephen Moore is a twentieth century conflict historian and as an Air Power ECR is currently researching a new history of the Battle of Britain, which will draw on different perspectives to present a familiar story in a distinct way.

His PhD thesis was entitled “After the Blitz: Luftwaffe Operations over the United Kingdom and the Development of the Defence systems: May 1941 to December 1943”, and was completed at Newcastle University in 2019, where he was also a post-graduate teaching assistant. This study examined the continuing operations of the Luftwaffe and challenged the conventional view that subsequent attacks on the UK were insignificant.

His research interests include the development of strategic bombing, the experience of civilians on the home front under bombing, aircrew training, the air defence of the UK, particularly the Battle of Britain and night air defence, RAF operations during the Second World War, especially the area bombing campaign and Transportation Plan, and the military application of scientific developments such as the establishment of British radar network, command and control systems, development of airborne radar, Ground Control Interception, including mobile systems for the Normandy invasion.