At 6.00pm on Thursday 8 September 2022, Jane Lowes will discuss the strategy and technology behind Bomber Command’s minelaying campaign, and the experience of the crews involved. The lecture will be live-streamed online via Crowdcast. 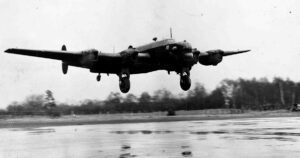 The Strategic Bombing Campaign has been the subject of discussion and debate almost from the moment of its inception. Countless popular history books, academic works, television documentaries and dramas have been devoted to the bombing war, yet academic historians and popular culture alike have largely ignored one, arguably crucial, aspect of Bomber Command’s work.

Working in close co-operation with the Admiralty, almost immediately from the outbreak of hostilities, Bomber Command crews laid thousands of mines off German – controlled ports, in harbours and busy sea lanes, targeting merchant and naval shipping, as well as the U-boat trialling and training grounds in Kiel Bay in the Baltic, and in the Bay of Biscay.

In this lecture I will examine the strategy behind the minelaying campaign. The implementation of the strategy, from the tentative operations by handfuls of Hampden bombers in the initial stages of the War, through to the mass minelaying operations by Halifax Squadrons in preparation for D-Day in 1944, will be considered. The technology and weaponry available to the minelaying crews will be assessed, along with enemy countermeasures.

The cost of these operations to the RAF, both in terms of lives and aircraft lost, will be discussed, and we will look at examples of specific minelaying operations flown by 10 Squadron, of 4 Group Bomber Command. The experiences of the airmen who took part in these operations will be examined, and the impact upon enemy shipping, operations and resources assessed.

Finally, we will explore some of the possible explanations as to why this important aspect of Bomber Command’s work, which claimed the lives of so many aircrews, has been so neglected, both in the official histories and by historians ever since.

Jane G. Lowes is a postgraduate student, currently studying for a Master’s Degree in Second World War Studies: Conflict, Societies and Holocaust,  at the University of Wolverhampton. Her particular interest is in Bomber Command and the Strategic Bombing Campaign. Jane has recently abandoned her career as a lawyer to write full time; her well-received second book, “Above Us, The Stars: 10 Squadron Bomber Command – The Wireless Operator’s Story” was published in 2020. Jane is a member of 10 Squadron Association and a speaker for the Commonwealth War Graves Commission. She also lectures to groups throughout the country on social history and on the work  and men of Bomber Command.