At 6.00pm on Thursday 15 December 2022, Sally McGlone will discuss changes in perception of females in the military and use as aircrew between 1939 -1954 pitched against a backdrop of societal and geopolitical changes. The lecture will be live-streamed online via Crowdcast. 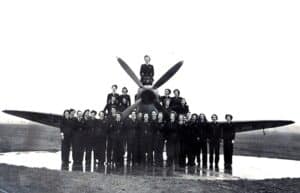 An analysis of the development of and changing role of female pilots in British military and civilian aviation between 1939 and 1954. Historical narrative complementing critical examination of the extent to which the ATA contributed towards the increase in numbers of female pilots, or is this a misrepresentation of factual history?

Introduction to and examination of, “Why not a Women’s Air Force Too?” (Amy Johnson 1937) underpinning evidence that female aviators were subject to discrimination in the pre and post WWII period, despite having equal or more, flying experience than their male counterparts. The paper will discuss changes in perception of females in the military and use as aircrew between 1939 -1954 pitched against a backdrop of societal and geopolitical changes. The paper will provide supporting evidence to allow critical analysis of pre conceptions and misrepresentations in popular history.

The paper will examine WAAF and Air Transport Auxiliary, their unique impact in contributing to (what was hoped would be) a turning point in time for the inclusion of female pilots in British aviation (WRAFVR 1947 Flying Trg) period of equality that could have been used as a template to increase female pilot numbers and successfully employ and integrate them in military and civil aviation; or is this also a misconception, were there other factors influencing those in Government and the AM who could have supported schemes to employ females as pilots?

A critical overview and presentation of events that arguably still influence integration and numbers of female aircrew in 2022. Objectives of the paper twofold, to provide factual historical narrative of lived experiences of females in aviation in pre and post WWII. A combined focus of WAAF, WRAF, WRAFVR and ATA a critical examination of the extent to which women were integrated into civilian and military aviation.

Sally McGlone is a Post Graduate History Student at the University of Portsmouth. Most recently, Sally has been employed capturing oral histories for “Fighting with Pride” a military charity supporting LGBT+ veterans discharged prior to the lifting of the homosexuality ban in 2000. Before that, she worked for the Commonwealth War Graves Commission as a coordinator for CWGC volunteers in the Eastern UK region.

Sally dedicates her time to promoting the history of female servicewomen over the past 103 years and has spoken extensively on female aviation and military history on podcasts, interviews and through articles, she has been involved with numerous projects capturing female veteran oral histories for books and articles.

A member of the WAAF/WRAF/RAF(W) and Air Transport Auxiliary Associations; Sally is passionate about examining and sharing the lesser known areas of female military and aviation history to a wider audience, in particular, WRAFVR and WRAF (Cold War period) history. Between 1997 – 2013 Sally served in the RAF as an Admin (Sec) Officer and was deployed on operational tours of Kosovo and Afghanistan. Her extensive knowledge of the Armed Forces and experience as a servicewoman have proved invaluable in supporting her work promoting import female military history.