Virtual Lecture: The Jewish Chaplains of the RAF in the Second World War.

In this Free Virtual Lecture, Dr Jonathan Lewis discusses the seven Jewish Chaplains who were appointed in the Royal Air Force during the Second World War, together with the system of chaplaincy visits to Jewish personnel at RAF stations throughout Britain. 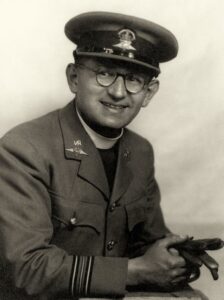 Jewish Chaplaincy in Britain began in 1892. In both World Wars Jewish Army Chaplains served in many theatres around the world. The Second World War saw the appointment of seven Jewish Chaplains in the Royal Air Force. Two -Jacob Ferber and Ruben Abenson – served in Britain; one – Sebastian (Sonnie) Bloch – in the Far East; one – Louis Sanker – in Europe; and three – F. G.Nathan, Israel Brodie and Eli Cashdan – in the Middle East. Nathan was locally appointed, one of the thirty thousand Jews living in the British mandate of Palestine who served in Allied ranks. Brodie was “translated” into the RAF from the Army, with which he had been evacuated from Dunkirk, and on return from RAF service in the Middle East “retranslated” into the Army to become Senior Jewish Chaplain and later Chief Rabbi. From London the Jewish Chaplaincy organised visitation to Jewish airmen, including the speaker’s father, serving on RAF stations around Britain

This virtual lecture will be held on the Museum’s Crowdcast Channel on Thursday 13 October at 6PM.

Dr Jonathan Lewis studied law at Cambridge and spent his career as a lawyer and a judge. In retirement he researched and was awarded a doctorate by University College London on Jewish Chaplaincy in the British Armed Forces from its inception in 1892 until the present day. His book on this subject is due to be published imminently. He lives in London and is married with two sons and two grand-daughters.

The RAF Museum’s 2022 programme includes Lunchtime Lectures at the RAF Museum, Cosford; Air Power Lectures, co-organised with the Centre for War and Diplomacy at Lancaster University; Air Power Seminars, co-organised with the University of Wolverhampton; and the Trenchard Lecture series, hosted at the Royal Aeronautical Society. You can attend these lectures in person or join us online as we live-stream from the venue.