At 6PM on Friday 15 July 2022, Dr Joseph Quinn explores the life, legend and mysterious death of Wing Commander Brendan “Paddy” Finucane. The lecture will be live-streamed online via Crowdcast. 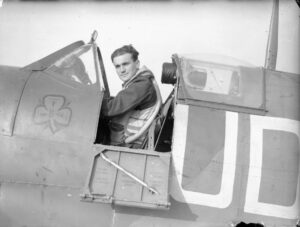 On 15 July 1942, three Spitfire squadrons of Hornchurch Wing took off before midday to embark on a routine ‘Ramrod’ operation over the north coast of France. Led by the top fighter ace of RAF Fighter Command and the youngest ever Wing Commander in the history of the service, twenty-one-year-old Irishman, Brendan Finucane, they were tasked with attacking a German Army camp at Étaples.

As the formation crossed the French coast off Le Touquet, Finucane’s Spitfire was suddenly struck by machine gun fire from the ground, which fatally damaged his radiator. Accompanied by his Canadian wingman, ‘Butch’ Aikman, Finucane immediately flew back out to sea in the forlorn hope of making it back to England. However, his engine seized after only 8 miles, and Aikman watched as Finucane’s plane disappeared beneath the surface as he attempted land on the water. He was never seen again.

This paper will mark the 80th anniversary of the death of Wing Commander Brendan Finucane by examining the circumstances surrounding his final mission over enemy territory. It will explore his background, personal life and career in the RAF, and the factors behind his meteoric rise, from unpromising beginnings during flight training, to national celebrity as Britain’s leading fighter ace.

In addition, the paper remarks on the effectiveness of Fighter Command’s air campaign of 1941 and 1942, championed by both Trafford Leigh-Mallory and his successor, Sholto Douglas, and whether the campaign of ‘Circus’, ‘Rodeo’, ‘Roadstead’ and ‘Ramrod’ operations, which contributed to Finucane’s fame as a fighter pilot, but that ultimately claimed his life, had actually achieved anything meaningful for the war effort beyond their propaganda value.

Lastly, the paper examines Finucane’s rise to prominence, both as a fighter pilot and as a public figure, and explores the ‘claims’ controversy which erupted during his time as commander of No. 452 (Australian) Squadron. The paper will also highlight the impact that his celebrity status made upon Britain’s relationship with his native country, neutral southern Ireland, as well as the influence of his success and fame upon Irish recruitment to the British forces. Moreover, it posits whether the combined pressures of fame and public status, family and personal commitments, as well as the growing level of command responsibility being place upon his shoulders, had begun to weigh too heavily upon Finucane during his last days.

It will offer a cursory reminder of Britain’s growing need for heroes during the dark and uncertain days of the Second World War, and ultimately argues that Finucane was as much a victim of the competing imperatives of the day as he was a German machine gunner’s bullet over northern France in July 1942.

Dr. Joseph Quinn is an Irish historian based in London. He completed his PhD thesis at the Centre for Contemporary Irish History at Trinity College Dublin in 2015, and specialised on the recruitment of volunteers from Northern Ireland and neutral Éire to the British forces during the Second World War. He has published a number of scholarly articles and book chapters deriving from this research and is currently preparing a monograph adapted from his thesis for publication with Cambridge University Press.

Joseph previously lectured on modern Irish history and the British Empire at University College Dublin. During 2019-20, he served as Second World War Research Associate at the National Archives, Kew, and throughout 2021 held the post of Digital Researcher on the Imperial War Museum’s Second World War & Holocaust Partnership Programme. Joseph’s current research is focusing on Irish airmen in the British flying services during the two world wars, with a particular interest in the service of Irish personnel in the wartime RAF.