Virtual Lecture: The RAF, the Aden Protectorate Levies and Counter-insurgency in South Arabia, 1951-1957

At 12.30PM on Friday 1 July 2022, Dr Huw Bennett (Cardiff University) and Dr Edward Burke (University of Nottingham) will discuss the Royal Air Force, the Aden Protectorate Levies and Counter-insurgency in South Arabia during 1951-1957.

This lecture will be live-streamed online via Crowdcast. 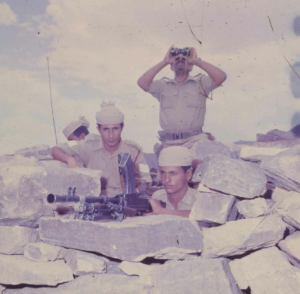 Loyalist bargains between European colonial powers and indigenous collaborators were fluid and frequently renegotiated. Indigenous forces could mutiny or refuse to execute orders they believed violated, explicitly or implicitly, the terms of their agreement with the colonial power. As well as enabling colonial violence, locally recruited forces could also restrain it. This paper examines the experiences and influence of the RAF Regiment-officered Aden Protectorate Levies (APL) from 1951 to 1957. It argues that the APL proved increasingly reluctant to carry out a new Forward Policy in South Arabia. Rather than accepting the Air Ministry’s recommendation to temper their expansionism, colonial administrators blamed RAF officers in command of the APL for a collapse in morale, and successfully campaigned for an increased role for the British Army in Aden and its protectorates. The result was the continued prosecution of a failed policy that consumed ever greater British military resources.

The lecture will take place in our Cosford lecture theatre on Friday 1 July 2022. This lecture will begin at 12.30PM.

If you would like to attend the lecture  in Cosford please visit: https://www.rafmuseum.org.uk/midlands/whats-going-on/events/

About Huw Bennett and Edward Burke

Dr Huw Bennett is Reader in International Relations at Cardiff University, specialising in strategic studies, military history and intelligence studies.  He writes on aspects of British defence since 1945.  His first book, Fighting the Mau Mau: The British Army and Counter-Insurgency in the Kenya Emergency, was published by Cambridge University Press in 2012.  He is currently completing a book for Cambridge on British military strategy in Northern Ireland in the early 1970s.

Dr Edward Burke is an Associate Professor in International Relations and Director of the Centre for Conflict, Security and Terrorism at the University of Nottingham specialising in insurgency, terrorism and political violence. In May 2020 Edward commenced a two-year fellowship funded by the Arts and Humanities Research Council on paramilitary violence. Dr Burke’s book – Army of Tribes: British Army Cohesion, Deviancy and Murder in Northern Ireland – was published by Liverpool University Press. His work has also been published in Terrorism and Political Violence, the Journal of Imperial and Commonwealth History, PRISM, and RUSI Journal.

About the RAF Museum research programme