Virtual lecture: Trials, Triumphs and Trauma in the Controversial Life of Sholto Douglas

At 6.00pm on Thursday 1 September 2022, Dr Katharine Campbell discusses Sholto Douglas, ‘a gloriously contentious character’, and examines the highs and lows of Douglas’ life, illustrated with original photographs and accompanied by insights from the scientific literature on PTSD and moral injury. The lecture will be live-streamed online via Crowdcast. 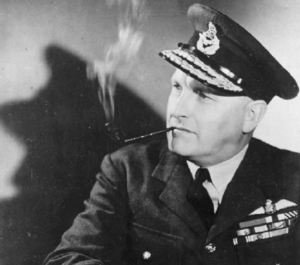 Katharine Campbell’s father Sholto Douglas was the hero of her childhood, an unconventional senior commander in the Royal Air Force, described as ‘a gloriously contentious character’. Following childhood abandonment and poverty, he became a pioneering aviator in the Royal Flying Corps in the First World War, rising through the ranks of the fledgling RAF in the inter-war years and playing an important part in the development of radar. During the Second World War, he was appointed to crucial role as C-in-C in turn of Fighter, Middle East and Coastal Commands. In the war’s devastating aftermath, he served as C-in-C of the British Air Forces of Occupation and then as Military Governor of the British Zone in Germany. He ended his career in civil aviation as Chairman of BEA.

Despite his rise to the heights of the RAF, Sholto’s career was marked by controversy, notably over the Big Wing in the Battle of Britain, when he undoubtedly backed the wrong tactic. He became embroiled in arguments over Churchill’s disastrous ‘Operation Accolade’ in the Middle East and was the subject of a protracted row between Churchill, Sholto’s strong supporter, and Roosevelt, who mistrusted him. However, he reached the zenith of his powers in Coastal Command at the end of the war.

But Sholto’s life was stalked by a dark shadow from early on, which likely affected all his decision-making. Katharine didn’t recognise it fully until she started researching his story, although as a child, she had observed its distressing symptoms: undiagnosed post-traumatic stress disorder (PTSD). It was triggered especially by Sholto’s harrowing memories of signing numerous death warrants in post-war Germany, from which he also suffered moral injury.

In this presentation, Katharine will examine the highs and lows of Sholto’s life, illustrated with original photographs and accompanied by insights from the scientific literature on PTSD and moral injury.

Dr Katharine Campbell was a neuroscientist before becoming a writer, completing an MSc in Biomedical Sciences Research (with distinction) at King’s College London, followed by a PhD in Neuroscience at University College London, where she worked as a post-doctoral fellow for many years on the development of pain processing in infants.

Her fascination with the events of the first half of the twentieth century was initiated by the exciting stories she heard as a child from her father, Sholto Douglas. Her biography of Douglas, Behold the Dark Gray Man, was published in 2021, having been shortlisted for the 2018 Tony Lothian Prize.

She has written invited articles for Christ Church College Oxford, the International Brigades Memorial Trust, the RAF Museum and 43 Fighter Squadron RAF, and collaborates with historians across Europe and in the UK, and with leading experts in Australia and the Netherlands on PTSD.

In 2021, she was asked to participate in the Australian Royal Commission on Defence and Veteran Suicide. She also campaigns for the charity Combat Stress.