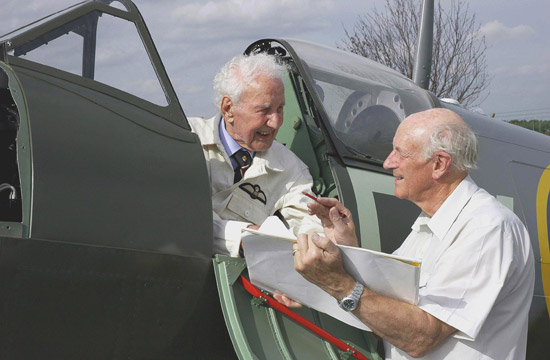 The artist, Michael Turner, first met Alex Henshaw when he was invited to produce a painting for the dust jacket of “Flight of the Mew Gull”, the first volume of Henshaw’s memoirs, in 1979. Over the next twenty-eight years the two men developed a close friendship deriving from the production of a unique series of paintings recounting the stories of the many dramatic and interesting incidents in Henshaw’s flying career.

Alex Henshaw took up flying in 1932 and quickly gained his Pilot’s licence flying over the open landscape of Lincolnshire. Aviation soon became a passion in which the honing of his skill was matched by increasing ambitions to tour across Europe and to take part in competitions and races. He was joined by his father in these endeavours and in return for the latter’s management and guidance skills – not to mention sage advice like “I think you had better wear a parachute, My Boy…” – Alex taught his father to fly. Together they formed a well-balanced team.

The King’s Cup represented the pinnacle of amateur flying achievement during the 1930s and Henshaw was determined to win it. With a specially modified Percival Mew Gull he did so in 1938 and went on, in the following year, to undertake a very different type of flying experience – the long distance solo record flight to Cape Town and back. A more nerve-racking, gruelling and exhausting exercise in such a tiny aeroplane it would be hard to imagine, but his exceptional skill and determination allowed him to pull it off to world acclaim.

The Second World War put a stop to the ‘Golden Age of Flying’ and Henshaw’s expertise was channelled into vital war work testing aircraft for various companies. He worked first for Vickers at Weybridge and then for Supermarines at Castle Bromwich. Here his accuracy and sensitivity at the controls proved him to be a supreme test pilot contributing greatly to the safety and serviceability of the aviation industries’ products which would normally be flown by pilots hugely less experienced than himself.

Concentrating on business after the war, Henshaw re-emerged as the Grand Old Man of Flying after the publication of his books. In retirement, the re-living of those heady days gave him much pleasure and he was keen to place on record and make available to scholars the archive which he had accumulated. His papers are now safely lodged at the Royal Air Force Museum as well as his art collection. This exhibition features his collaborative efforts with Michael Turner, President of the Guild of Aviation Artists, to tell his story through pictures. It is a catalogue of thrills, spills and triumphs.