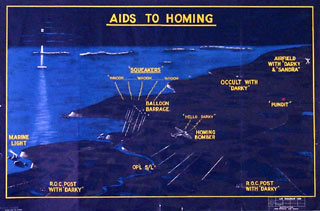 Navigation over blacked-out Britain was not easy, and a number of systems were set up to help aircrews find a safe landing. Barrage balloons were fitted with a radio transmitter giving out a warning tone which could be picked up on the aircraft’s wireless.

The aircraft could use the call-sign Darky: ground stations would then obtain a bearing on the signal, and comparison of the bearings from three stations would give the aircraft’s approximate position.

Some Royal Observer Corps posts were also equipped with radio sets to provide this service. Operational searchlights (shown as Op’l S/L’s in the diagram) could be used to point the way to an airfield, where three searchlights called Sandra lights would form a cone overhead.

Occult lights flashed a series of Morse letters which enabled aircrew to fix their position, as did Pundit beacons.