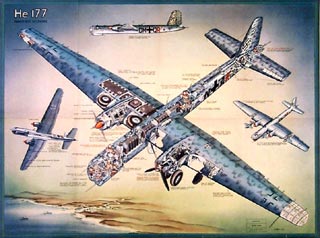 The Heinkel He177 Greif (Griffin) was the only German long-range strategic bomber to see service during the Second World War but it failed to live up to its potential.

Although it resembled a twin-engined aircraft, the He177 was in fact powered by four engines, with two coupled together in each nacelle driving a single propeller. This radical arrangement caused the engines to overheat when the prototype first flew in November 1939, but the design team was not permitted sufficient time to solve the problem before the aircraft was pressed into service. Unsurprisingly, overheating troubled the He177 throughout its career and was the cause of so many engine fires that it was nicknamed the “Flaming Coffin” by its crews. Nearly 1,200 examples of the type were built before its withdrawal at the end of 1944; including one which was modified to carry the planned German atomic bomb. Neither it, nor the bomb, were completed.

No He177 survived the war but an example of the ill-fated coupled engine is displayed at the Museum’s site at Cosford.