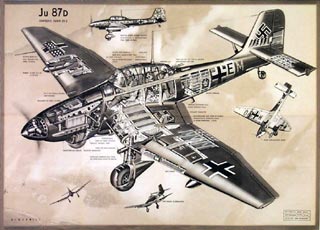 With its sinister appearance and terrifying scream, the Junkers Ju87 has come to symbolise the period of Blitzkrieg warfare. Commonly known as the “Stuka” (from Sturzkampffl ugzeug, the German for dive-bomber) the Ju87 made its reputation as a superlative dive-bomber and close-support aircraft during the Spanish Civil War (1936 – 1939) and in the campaigns in Poland and France (1939 – 1940). The type was, however, slow and poorly armed and proved vulnerable to RAF fighters during the Battle of Britain.

Thereafter the Ju87 only operated successfully when German air superiority was assured, and it was gradually replaced in the ground support role by more modern aircraft such as the Focke Wulf Fw190.

The “Stuka” on display in the Battle of Britain Hall is a Ju87G-2 which was modified to serve as an anti-tank aircraft.