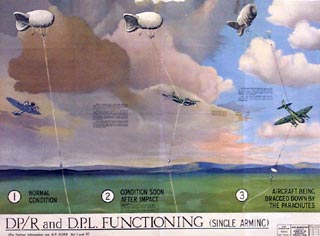 Between 1939 and 1945 barrage balloons were used extensively to protect key targets against air attack. Enemy bombers were forced to fly above these hydrogen-filled kite balloons or risk hitting their steel cables. Dangerous as such collisions were, they did not always destroy the attacking aircraft.

DPL (Double Parachute Link) was designed to increase the damage inflicted on an aircraft when it struck the cable. An explosive cable cutter and a heavy-duty parachute were attached to both ends of the cable. When an aircraft hit the cable, the shock of the impact triggered the explosive cutters and released a long section of cable. The cable was dragged along behind the aircraft, opening a parachute at each end: this slowed the aircraft down and made the pilot lose control.

DP/R (Double Parachute/Ripping) was another version of DPL with an added safety function. If a balloon cable parted accidentally, DP/R cut the cable just beneath the balloon. The heavy cable then fell to the ground safely suspended beneath a parachute and a line attached to a ripping panel in the balloon released the gas so that it too came down.