Sergeant Charles Brennan was Flight Engineer on Lancaster ED925. This aircraft was the second to attack the Möhne Dam, but its mine bounced over the dam before detonating. Although the dam was missed, the mine succeeded in destroying the hydro-electric power station below the dam.

During the bombing run Brennan’s aircraft was hit by anti-aircraft fire and crashed three to four miles north-west of the target. Four of the six crew, including Brennan, were killed in the crash, the other two were taken prisoner. 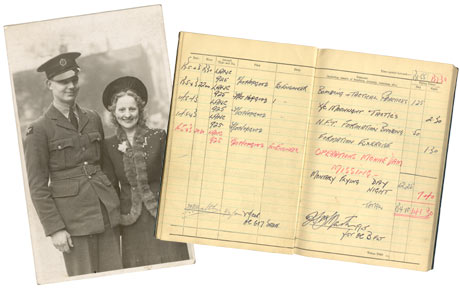 Brennan, shown above with his wife on their wedding day, is buried in Rheinberg War Cemetery, Germany. The Station Commander would as a matter of course ensured that Brennan’s log book had an entry made to note he was missing.