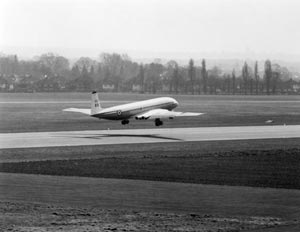 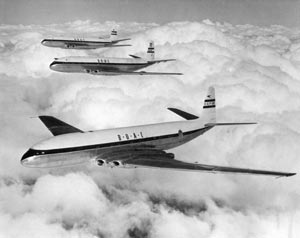 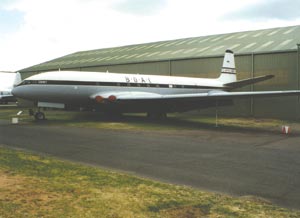 In November 1967 the aircraft was retired by the Ministry of Technology and on 8 April 1968 flew from Hatfield to RAF Shawbury. This proved to be the last of her 602 flights (1218 hours) and the last flight by any Comet l.

The Comet was redesigned as the Comet 4 and flew again in 1958. This aircraft became the first to offer a scheduled Trans-Atlantic service and 113 were made before production ceased in 1968. De Havilland learned the harsh lessons of fatigue crack growth and passed these on to other aircraft manufacturers.

Current Picture
The Comet was painted in BOAC livery in July 1978 and transported to the Museum on 17 September 1978 where it is currently on display. Although G-APAS never flew in BOAC markings, this colour scheme is representative of the first ever fleet of passenger jet aircraft.