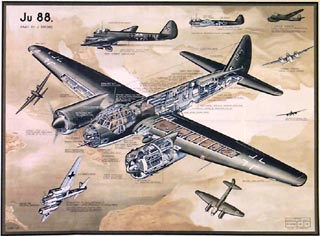 One of the most versatile combat aircraft of the Second World War, the Junkers Ju88 was originally designed as a medium bomber but its high speed and agreeable handling characteristics saw it usefully employed in the intruder, reconnaissance, anti-shipping and night-fighting roles.

The Ju88 R-1 on display in the Battle of Britain Hall is a night-fighter variant that was flown from Norway to Scotland in May 1943 after two members of its crew were persuaded to defect by British Secret Service agents. This aircraft’s nose-mounted Lichtenstein radar provided valuable information about German electronic defences that was especially helpful to RAF Bomber Command.