“It was a process of evolution, of trial and error, and even if we achieved success with new devices, new instruments or new methods, the public should never be told that raiders were not going to get through at all times.”

Under-Secretary of State for Air

After the Fall of France, the build up of British defences accelerated, as the prospect of a German invasion loomed. Coastlines were prepared with pillbox structures, anti-tank obstacles and barbed wire, in case of an amphibious assault. 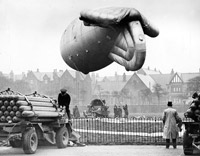 The British Army had lost much of its heavy equipment during the evacuation of Dunkirk; in the summer of 1940 even ammunition was in short supply. The Army would have to do the bulk of the fighting if an invasion took place but they were supplemented by members of the Local Defence Volunteers (later the Home Guard).

The Royal Navy remained a formidable

force even though it had suffered some losses during the early summer. If a German invasion set sail significant numbers of Royal Navy ships would have moved into the Channel and have attempted to inflict considerable losses on any enemy invasion forces.

The Royal Air Force had both Fighter and Bomber Command as their major offensive arms but as a defence RAF Balloon Command placed barrage balloons around potential target areas.

The Army’s Anti-Aircraft Command batteries worked with light and heavy anti-aircraft guns in co-operation with searchlight units. They were stationed to defend airfields, towns and factories.

‘K’ and ‘Q’ sites were decoy airfields set up to divert enemy bombing from their actual target. Starfish sites were also used in the same way to protect towns and cities. 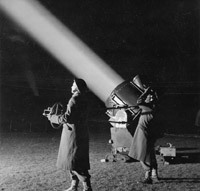 All searchlights were equipped with a light machine gun and accompanied by a sound locator, which indicated an initial bearing on the enemy aircraft.

This barricade not only illustrates the improvised nature of many of the British defences but also that significant travel restrictions were placed upon civilians – even if they could obtain sufficient petrol.

In the summer of 1940 some of the most extraordinary defence schemes were put into place. Oil defence was such proposal. As the invasion neared the shore oil would be pumped out onto the sea surface and then set alight. 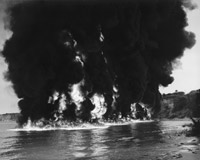 A number of bodies of badly burned German servicemen washed up on the English east coast created a myth that this system had been used operationally.