The youngest of the ‘first eight women’, at just 21, Joan Hughes served with the ATA throughout the war. She was a capable instructor and flew everything except flying boats.

‘The youngest and least composed (photographically) of the group, her hands next to her thighs on the wall. She is 5 foot 2 inches tall, 21 years old and has already been an instructor for three of them. In due course she will fly Lancasters to Lakenheath and a Tiger Moth under a bridge as Lady Penelope’s stunt double in a 1968 Thunderbirds film.’ 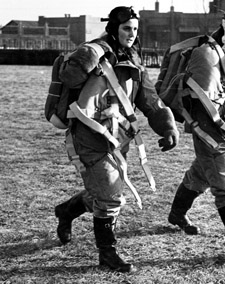