The Cenotaph is a national memorial to remember ‘The Glorious Dead’. It was originally constructed of wood and plaster and was built as a place to lay wreaths on the first anniversary of the end of the First World War in 1919. 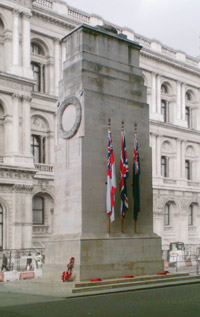 It proved to be so important to the public that a permanent memorial was produced, made out of Portland stone.

The Cenotaph in Whitehall, London, was officially unveiled by King George V on 11th November 1920, and the memorial has been used ever since as a monument to honour the fallen.

Each year on Armistice Day wreaths of poppies are laid by royalty, heads-of-state and other officials. Wreaths are then laid by the heads of the military services and these are followed by the wreaths of veterans organisations.

There are memorials similar to the London Cenotaph in countries all over the world, and poppy wreaths are laid by dignitaries on Armistice Day just as is done at the original memorial.