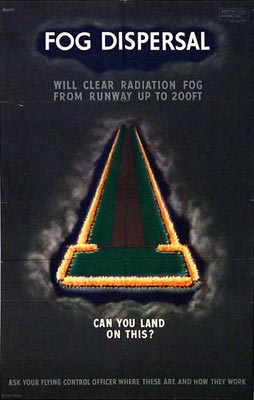 Fog on their home airfields was such a hazard to RAF aircraft returning from bombing operations that in 1942 the Prime Minister, Winston Churchill, ordered the Petroleum Warfare Department to develop a way of dispersing it. The result was FIDO – Fog, Intensive, Dispersal Of – a network of pipes and petrol burners capable of clearing fog from runways.

FIDO was installed at 15 airfields around the UK – most of them in Bomber Command – as well as at some airfields in the USA and in the Aleutian Islands. By burning petrol at the rate of 100,000 gallons (456,000 litres) per hour FIDO could produce sufficient heat to lift fog and enable pilots to take-off and land safely when poor visibility would otherwise have made flying too dangerous.

Between 1943 and 1945 2,500 aircraft landed safely in fog thanks to FIDO, saving the lives of 10,000 aircrew. FIDO also helped to shorten the war by allowing operations to continue when the weather would have made flying impossible. The last FIDO installation, at RAF Manston, was removed in 1959.