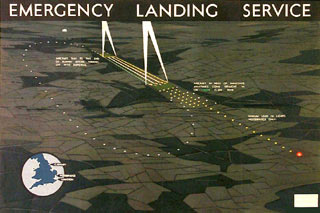 Three runways on the East coast were constructed between 1942 and 1944 for use by damaged bombers returning from raids. They were much wider than normal runways, and divided into three lanes by the use of lights. This was so that the runway would not be blocked by aircraft which had been unable to lower their undercarriage – although the airfield was also equipped with bulldozers to clear the runway rapidly!

The runways ran from East to West, so that damaged aircraft would not have difficulty lining up to land, and FIDO equipment (see the adjacent diagram) was provided to burn off fog. In foggy conditions dozens of aircraft could land at each airfield and extensive parking areas were provided for them.

Of the three airfields, only Manston – now a civil airport – is still in use. Carnaby became a missile site and was used until the early 1960s, whilst Woodbridge was a USAF base into the 1990s.