Dammit, chaps – who remembered to bring this thing anyway? 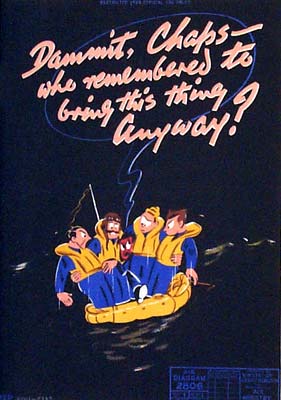 An image such as this reminded crews of the importance of always taking the dinghy when they baled out of an aircraft or had to ditch. The September 1942 edition of “Tee Emm”, the RAF’s light-hearted safety training magazine, carried an amusing advert for a training film entitled “Prepare for ditching”, written by Tee Emm’s film correspondent:

R for Robert, a great big tough Halifax…partnered by that glamorous blonde, Miss Rubba Dinghy. Robert ditches himself in the North Sea, but thanks to the skipper’s earlier insistence on the importance of dinghy-drill training the crew escape, ably supported by the heroine who carries one of the most efficient compacts we have ever seen…The skipper’s peculiar ideas about actually making his crew learn their dinghy drill beforehand, instead of wishing they had when it was too late, was due to a narrow escape on a previous trip when he had been second pilot to a skipper who didn’t care much about anything so wrote off nearly all his crew, including himself…