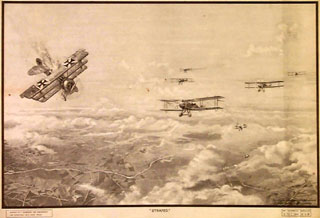 From an original drawing by G.H. Davis

The principle of aircraft flying in formation so that several gunners could fire at attacking fighters was established early in the air war. It remained a key factor in most air forces’ strategy until the end of the Second World War, and its influence is best illustrated by the United States Army Air Forces’ development and use of aircraft such as the B17 Flying Fortress, which featured many gun positions.

Mutual protection was essential if the aircraft were to carry out long-range daylight raids, as the RAF found to its cost early in the Second World War: heavy losses sustained in daylight operations by Wellingtons and other aircraft forced the RAF to shift to night bombing.

The V formation emphasised by this Air Diagram may have worked well for aircraft which had a crew, but not with single seaters. In the early stages of the Second World War many RAF fighters were lost because their pilots were concentrating on keeping formation, rather than looking out for enemy aircraft approaching from behind.